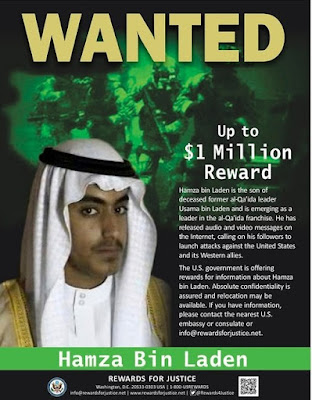 The son of Osama bin Laden is the subject of a piece at militarytimes.com.
DUBAI, United Arab Emirates — Years after the death of his father at the hands of a U.S. Navy SEAL raid in Pakistan, Hamza bin Laden now finds himself in the crosshairs of world powers.
In rapid succession in recent weeks, the U.S. put a bounty of up to $1 million on him; the U.N. Security Council named him to a global sanctions list, sparking a new Interpol notice for his arrest; and his home country of Saudi Arabia revealed it had revoked his citizenship.
Those measures suggest that international officials believe the now 30-year-old militant is an increasingly serious threat. He is not the head of al-Qaida but he has risen in prominence within the terror network his father founded, and the group may be grooming him to stand as a leader for a young generation of militants.
“Hamza was destined to be in his father’s footsteps,” said Ali Soufan, a former FBI agent focused on counterterrorism who investigated al-Qaida’s attack on the USS Cole. “He is poised to have a senior leadership role in al-Qaida.”
"There is probably other intelligence that indicates something's happening and that's what put this thing on the front burner," he said.
You can read the rest of the piece via the below link:
https://www.militarytimes.com/flashpoints/2019/03/17/born-into-al-qaida-hamza-bin-ladens-rise-to-prominence/?utm_source=Sailthru&utm_medium=email&utm_campaign=ebb%2018.03.19&utm_
term=Editorial%20-%20Military%20-%20Early%20Bird%20Brief
Posted by Paul Davis at 4:45 AM