My Washington Times Review Of 'The Border' 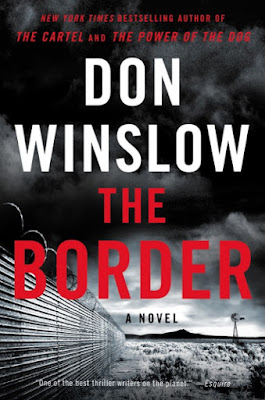 The Washington Times published my review of Don Winslow’s The Border.


While serving in the U.S. Navy on an aircraft carrier in San Diego in 1970, I was a frequent visitor to Tijuana. We were told to be most careful regarding the criminals and drug gangs that operated openly in Tijuana, especially at night. During the day, Americans flocked to Tijuana for the shopping and the city was relatively safe. But at night, the streets, bars and cantinas were prowled by drug dealers, armed robbers and other assorted criminals. Still, many American servicemen flocked to Tijuana for the nightlife. In later years, rival criminal drug gangs turned this exotic and exciting Mexican city into an open war zone.


For more than 20 years, Don Winslow has researched the Mexican drug cartels and its huge, far-reaching and powerful criminal enterprise. Mr. Winslow’s “The Border” is the last installment of a fictional trilogy that includes 2005’s “The Power of the Dog” and 2015’s “The Cartel.”


The first two well-researched and well-written novels feature a mano a mano contest between an “El Chapo” type brilliant and violent Mexican drug lord named Adan Barrera, the leader of the Sinaloa cartel, and an obsessive half-Mexican DEA special agent named Art Keller. The two, at times friends and allies, but more often bitter enemies, operate against each other in Mexico and across the border in America.


In “The Border,” Adan Barrera is missing after a gunfight with a rival cartel and is presumed dead. In his wake, other drug lords vie for his top spot with corruption, conspiracy and countless murders.


...The horror of the murders and violence in this novel and the two previous novels might seem gratuitous had not Mr. Winslow based nearly all the atrocities on true incidents. Mr. Winslow’s drawn-from-the-headlines scenes are supplemented with scenes and characters that are reminiscent of some popular crime films.


Having gone out with narcotic officers on drug raids and having interviewed numerous cops and DEA special agents over the years, I found the crime scenes to mostly ring true.

https://www.washingtontimes.com/news/2019/mar/6/book-review-the-border-by-don-winslow/
Posted by Paul Davis at 6:58 AM