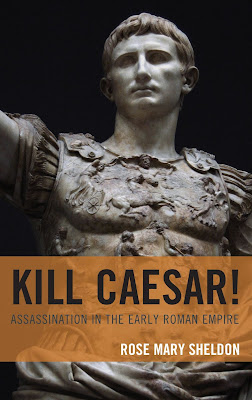 
The truly professional service officers sworn to guard chiefs of state and other dignitaries — notably U.S. Secret Service officers — have a hard rule: Good intelligence is the key to saving the subject’s life.


When intelligence fails, the result can be disaster. And such certainly was the case in the Roman Empire. Despite the detailing of up to 9,000 men to guard the emperors, 85 percent of the men who sat on the throne were assassinated.


Even Rose Mary Sheldon, a professor of history at Virginia Military Institute, and our foremost authority on ancient intelligence, was startled at the body count.


Why and how did the Romans resort to assassination to rid themselves of rulers? Ms. Sheldon explores the fate of Julius Caesar and his four immediate successors to explore what went horribly wrong in Rome — how security failures and seemingly endless family wrangles cost so many lives.


Her case studies show that the Roman Empire was a boiling cauldron of conspiracy, where even an emperor’s brothers or sons were not beyond suspicion. She lists four broad groups an emperor had to control to feel safe: The aristocracy, the military, the populace and his own family.


More unsettling, “the very people who made up the emperor’s closest circle were also the ones who could endanger his security.”

https://www.washingtontimes.com/news/2019/mar/4/book-review-kill-caesar-by-rose-mary-sheldon/
Posted by Paul Davis at 7:46 AM