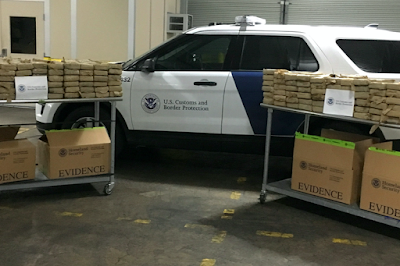 The U.S. Customs and Border Protection released the above photo and the below information:

This multi-agency team was led by U.S. Customs and Border Protection (CBP) and Homeland Security Investigations (HSI), and consisted of partner agencies Homeland Security Joint Task Force-East, U.S. Coast Guard, Coast Guard Investigative Service, Philadelphia Police Department, Delaware State Police, Pennsylvania State Police, Nether Providence Police Department, the Office of the Attorney General Bureau of Narcotics Investigation, and the DEA’s Philadelphia Division.
Inside one of the containers offloaded from the MSC Desiree, authorities discovered 13 large black duffel bags containing a combined 450 bricks of a white powdery substance. A sampling of that substance tested positive for cocaine.
The cocaine weighed 537.6 kilograms, or 1,185 pounds, three ounces, and has a street value approximately $38 million.
CBP officers seized the cocaine. HSI is investigating.
“Taking a half-ton of dangerous drugs out of circulation is a significant success for this collective team of federal, state and local law enforcement officers who work very hard every day to keep people safe,” said Casey Durst, CBP’s Director of Field Operations in Baltimore.  “Customs and Border Protection remains committed to working with our law enforcement partners and to disrupting narcotics smuggling attempts at the Area Port of Philadelphia.”
This is CBP’s fourth largest cocaine seizure in the Area Port of Philadelphia, and the largest since a 1,945-pound cocaine seizure May 23, 1998.
The shipping container commodity was natural rubber, which was laden in Guatemala.
CBP officers screen international travelers and cargo and search for illicit narcotics, unreported currency, weapons, counterfeit consumer goods, prohibited agriculture, and other illicit products that could potentially harm the American public, U.S. businesses, and our nation’s safety and economic vitality.
On average, CBP seized 4,657 pounds of narcotics every day across the United States.
U.S. Customs and Border Protection is the unified border agency within the Department of Homeland Security charged with the management, control and protection of our nation's borders at and between official ports of entry. CBP is charged with securing the borders of the United States while enforcing hundreds of laws and facilitating lawful trade and travel.
Posted by Paul Davis at 1:39 AM