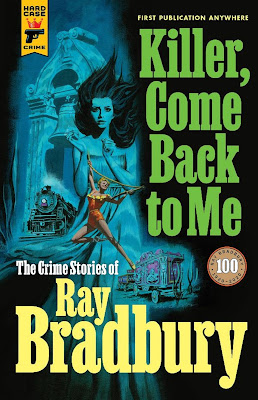 The Washington Times ran my On Crime column on Ray Bradbury’s crime stories.

Ray Bradbury, who was born in 1920 and died in 2012 at the age of 91, wrote 400 short stories and nearly 50 books in his lifetime. He is best known for his novels, such as “Fahrenheit 451,” “The Martian Chronicles” and “Something Wicked This Way Comes,” as well as other science fiction, fantasy and horror stories.

He is perhaps less known for his crime stories.

It is fitting then that “Hard Case Crime,” a publisher of hard-boiled crime fiction ranging from lost and out of print masterpieces to novels written by today’s practitioners of the crime genre, has published a collection of his crime fiction during the Ray Bradbury Centennial.

“Killer, Come Back to Me: The Crime Stories of Ray Bradbury,” features 20 short stories from the master storyteller.

“I … took all these pages and put them in my talking box. That was the box where my ideas lay and spoke to me early mornings … so my stories got written.” In the early 1980s, Ray Bradbury used his imaginary talking box to compose “Death is a Lonely Business,” an experiment in autobiography that emerged from decades of suspense crime stories told through unexpected plot twists and vividly dark metaphors,” Jonathan R. Eller writes in the introduction. “If you want to know how Ray Bradbury developed the power to write this late-life novel and its sequels, you must read through the tales gathered here in ‘Killer, Come Back to Me.’”

Mr. Eller noted that selecting the stories for the collection was a challenge that was eagerly embraced. He wrote that an earlier collection, “A Memory of Murder,” selected a number of the stories from Ray Bradbury’s Popular Publications magazine sales of the mid-1940s.

“ ‘Hard Case Crime’ publisher Charles Ardai, Bradbury’s long-time agent Michael Congdon, and I eventually reached across a far broader span of time to bring together the best early stories with the latter tales that document Bradbury’s best crime suspense efforts written in the 1950s and early 1960s,” Mr. Eller writes. “In the process, we harvested three of Bradbury’s noir-era tales that had evaded the earlier collection entirely: “The Fruit at the Bottom of the Bowl”; our title story, “Killer, Come Back to Me”; and “Where Everything Ends,” the long-unpublished source text for Bradbury’s milestone 1985 detective novel, “Death Is a Lonely Business.”

The title story is about how the girlfriend of a deceased gangster finds and grooms a man into a replica of her late killer boyfriend and stands behind him as he takes over a criminal gang. Other clever and well-written stories are about a ventriloquist’s dummy, a child who insists she hears a voice coming from a grave, and a time traveler. 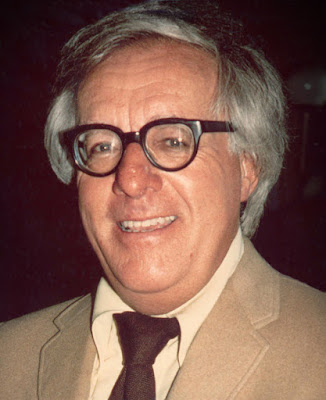 Note: The above photo of Ray Bradbury was taken by Alan Light.
Posted by Paul Davis at 10:31 AM

Labels: Hard Case Crime, Killer Come Back To Me, My On Crime column, Ray Bradbury's crime stories, The Washington Times