Trump Vs. Biden On Policing, Criminal Justice: Where They Stand 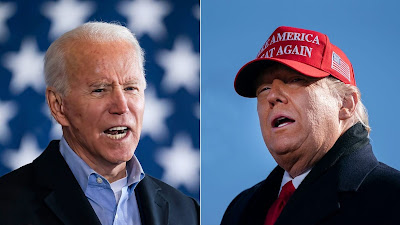 Stephanie Pagones at FoxNews.com offers a piece on the views expressed by the presidential candidates on policing and the criminal justice system.

A series of months punctuated by protests that, at times, devolved into unrest or riots have highlighted differences in the beliefs of President Trump and Democratic contender former Vice President Joe Biden when it comes to the role of law enforcement and criminal justice in America.

Protests following the deaths of multiple Black individuals nationwide, such as George Floyd in Minneapolis, Minn., Breonna Taylor in Louisville, Ky., and, most recently, Walter Wallace Jr. in Philadelphia, Pa., have called for police to be defunded or changes in police policy.

Trump, while campaigning last week in Arizona, expressed outrage over the violent protests in Philadelphia that followed Wallace Jr.'s death.

“I can tell you, Biden and Harris stand with the rioters and the vandals,” Trump said of Biden and his running mate, Sen. Kamala Harris, during a campaign rally. “I stand with the heroes of law.”

Meanwhile, the Biden campaign issued a joint statement in which Biden and Harris said that Wallace's was “a Black life that mattered.”

But where do Trump and Biden stand on the larger issues of policing and criminal justice reform? Public statements, debate comments and their own websites shed some light on the topic.