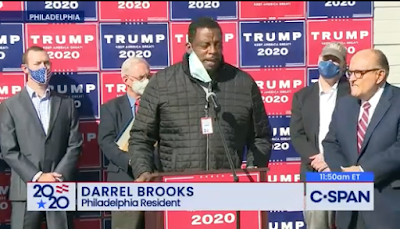 Ralph Cipriano offers a piece at Bigtrial.net on the feds investigating voter fraud in Philadelphia.

According to federal and local sources, the U.S. Attorney in Philadelphia has launched a criminal probe into multiple allegations of voter fraud here in the city, including Big Trial's own report about dead people voting, like Smokin' Joe Frazier.

The criminal investigation is part of a two-pronged legal approach as Republicans continue to attack the legitimacy of last week's presidential election where the media has unanimously already declared Joe Biden the winner.

On Saturday, former New York City Mayor Rudy Giuliani, President Trump's personal lawyer, announced at a press conference in Philadelphia that he would be filing a civil rights lawsuit in U.S. District Court, alleging that Republican voters were deprived of their right to a fair count of the vote.

At the press conference, Giuliani introduced three local Republican poll watchers who said they were prevented from watching the counting of more than 100,000 mail-in ballots at the Philadelphia Convention Center. Despite a court order allowing them in, two of the three poll watchers said, they were never allowed closer than 15 feet.

The third poll watcher, Lisette Tarragon, a longtime city resident and retired attorney, said that when she and other Republican poll watchers tried to get into the Civic Center to watch the count, "I never got past the first identification stage . . .  I felt insidious fraud going on. I felt we were kept from doing our civic duty."

At his press conference, Giuliani attacked the "decrepit Democratic machine" and said that Philadelphia had "a sad history of voter fraud."

"After all, Joe Frazier is still voting here," Giuliani said, despite the fact that the former heavyweight champ died in 2011. "We should go see if Joe is voting Democratic or Republican now from the grave."

The mayor was referring to a Big Trial report that according to city records that only city employees have access to, a parade of 22 dead people, led by Smokin' Joe, had previously voted in past city elections. The dead voters included seven hero cops who died while serving in the line of duty, and eleven dead relatives of police officers.

Asked if this alleged practice was disrespectful to police, FOP President John McNesby said, "disrespectful is putting it lightly if in fact true."

"We look forward to seeing the outcome of what the investigation brings."

… "You are poorly served, ladies and gentlemen of Philadelphia," Giuliani continued in remarks that didn't appear in The Philadelphia Inquirer. "Mayors who let riots take place and district attorneys who set criminals free, I don't think they're gonna care much about ballot fraud."