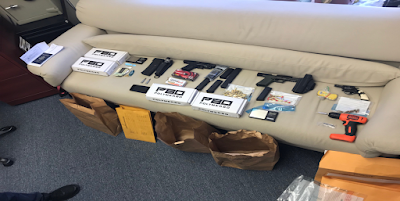 The Pennsylvania Attorney General’s Office released the below information:

Ghost guns typically start as “80% receivers” that are often sold in kits without background checks. They can be easily and quickly put together, lack serial numbers so they cannot be traced, and, once fully assembled, can operate as fully functioning firearms.

“Ghost guns are fueling the gun violence epidemic that takes the lives of Pennsylvanians every single day. Once these DIY homemade gun kits are in the wrong hands, in mere hours they become untraceable, fully operational firearms causing so much senseless violence,” said Attorney General Josh Shapiro. “The Office of Attorney General’s Gun Violence Task Force and Organized Crime Section, along with our federal and local law enforcement partners, are working overtime to target these gun traffickers and get illegal guns off our streets.”

Najaye Davis, 19, purchased multiple 80% receiver ready-made gun kits with large amounts of cash at the Morgantown Gun Show on Saturday, Feb. 27, 2021. He and a co-conspirator were then seen leaving the venue driving eastbound towards Philadelphia. Based on their investigation, Office of Attorney General (OAG) agents believed Davis was illegally making and selling ghost guns in Philadelphia. Davis is prohibited from purchasing or possessing a handgun on the streets of Philadelphia.

As a result of their investigation, agents obtained a search warrant for Davis’ residence in Philadelphia, which was executed on Friday, March 5, 2021. During the search, agents seized three fully functioning unserialized ghost guns, one 80% receiver, $8,600 in cash, additional firearm parts including trigger assemblies, more than 1,000 rounds of ammunition, and multiple extended magazines both loaded and unloaded. The investigation revealed that Davis was in a criminal enterprise that made and sold unserialized ghost guns on the streets of Philadelphia, making $500 on each sale.

On Sunday, Feb. 28, Malachi Matthews and Kenneth Manni purchased four 80% receiver kits at the same gun show and left. The car was surveilled until the men arrived at a residence on 21st Street in Philadelphia, where agents suspected an illegal gun manufacturing and trafficking operation was taking place.

On Tuesday, March 2, OAG Gun Violence Task Force and Organized Crime agents executed a search warrant and recovered: four 80% receiver ready-made gun kits, two fully assembled unserialized ghost guns, one Smith and Wesson revolver, two boxes of ammunition, multiple magazines, approximately thirteen packets of suspected fentanyl, two digital scales, and a drill suspected to be used in the making and assembly of fully functioning ghost guns. Matthews, Manni and Montague Coker were on site at the “build house” during the execution of the search warrant. Coker and Matthews attempted to flee through the roof of the premises. Both Coker and Matthews are previously convicted felons and considered Persons Not To Possess a Firearm.

Matthews, Manni and Coker were arrested on Tuesday, March 2. Matthews and Coker are both being charged with three counts each of Violation of the Uniform Firearms Act, and Manni is being charged with possession of a controlled substance, suspected to be fentanyl, and other Violations of the Uniform Firearms Act. These cases are being prosecuted by the Philadelphia District Attorney’s Office Gun Violence Task Force.

Davis was arrested on Friday, March 5, and is being charged with six counts of Illegal Transfer of a Firearm, one count of Dealing in Unlawful Proceeds, one count of Corrupt Organizations and one count of Conspiracy. This case is being prosecuted by the Office of Attorney General’s Gun Violence Task Force.

These investigations were conducted in partnership with the Office of Attorney General’s Gun Violence Task Force and Organized Crime Section, Philadelphia Police Department, Berks County Detectives, and the Bureau of Alcohol, Tobacco, and Firearms.

These investigations are still ongoing. All charges are accusations and these defendants are considered innocent unless and until proven guilty.