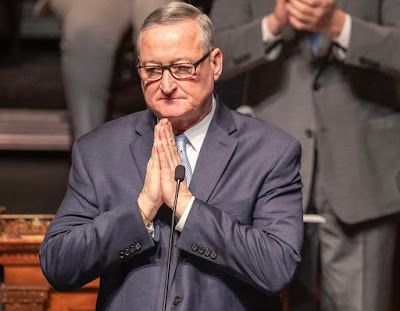 Stu Bykofsky takes a shot at the progressive Philadelphia mayor.

Mayor Kenney is losing it.

A sad announcement mourning a life lost was turned into progressive parody by the mayor’s office.

Here’s the first paragraph with my edits:

“Once again our city has been rocked by senseless gun violence. Tonight, we tragically lost a 15-year-old who had their entire life ahead of them. I extend my deepest condolences to their family during this unimaginable time. The lives of at least two other teenage victims will also never be the same, as they now have to recover from gunshot wounds that ravaged their young bodies, and face the long-term impacts of experiencing this trauma.”

In reality, the dead victim was a 15-year-old boy who had his  entire life in front of him. And he, not them, of him,  had a family, which mourns.

Now — a small percentage of you may be thinking, well, maybe they were nonbinary and thought of himself as they.

In that case, did Kenney have their families’ permission to out their son offspring?