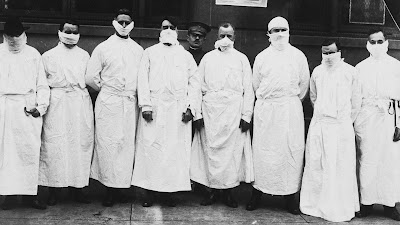 As History.com notes, on this day in 1918, the first cases of the flu pandemic were reporter.

Just before breakfast on the morning of March 4, Private Albert Gitchell of the U.S. Army reports to the hospital at Fort Riley, Kansas, complaining of the cold-like symptoms of sore throat, fever and headache. Soon after, over 100 of his fellow soldiers had reported similar symptoms, marking what are believed to be the first cases in the historic influenza pandemic of 1918, later known as Spanish flu. The flu would eventually kill 675,000 Americans and an estimated 20 million to 50 million people around the world, proving to be a far deadlier force than even the First World War.

The initial outbreak of the disease, reported at Fort Riley in March, was followed by similar outbreaks in army camps and prisons in various regions of the country. The disease soon traveled to Europe with the American soldiers heading to aid the Allies on the battlefields of France. (In March 1918 alone, 84,000 American soldiers headed across the Atlantic; another 118,000 followed them the next month.)

Labels: First Cases of Deadly 1918 flu pandemic were reported, On This Day in History