A Story Of Kidnapping, Spousal Resentment And Betrayal: My Washington Times Review Of 'The Power Couple' 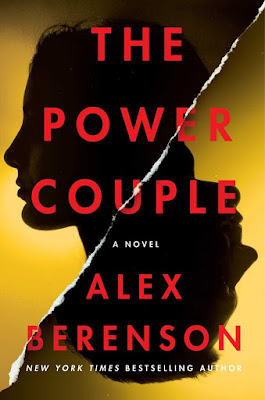 The Washington Times published my review of Alex Berenson’s The Power Couple.

“Marriage is a mirror,” Alex Berenson writes in the prologue of his novel, “The Power Couple.”

“Your spouse, the first person you see when you open your eyes. The last person you touch as you slip into bed. The person who knows you better than anyone else. Who shares your public joys and private sorrows. Who beds you and you alone. Who makes children with you and builds those children into adults.

“How it’s meant to be, anyway. The deal you made. Both of you. Call your spouse your best friend, if you must. Your partner. Really your spouse is your reflection. That face, always there.

“… This is the story of how I broke my vows. Broke that mirror. Don’t judge me until you’ve finished.”

Alex Berenson, a former New York Times reporter and author of the John Wells spy thriller series, offers a thriller about a couple, Rebecca and Brian, who appear to be a typical American couple with two teenage children who travel to Europe to celebrate their 20th wedding anniversary. In Paris, 19-year-old Kira and her younger brother, Tony, meet a young man and although Kira is interested in him, she informs him that the family is leaving for Barcelona. The young man, Jacques, tells Kira he will meet her there.

Kira goes missing in Barcelona and her family fears she has been kidnaped, while the local police believe initially that she went off willingly with the man from Paris that Tony told his parents and the police about.

Their fears are later confirmed, and they wonder if this were a case of a random kidnapping of a young American, or if it has anything to do with their jobs, as Rebecca is in charge of Russian counterintelligence for the FBI and Brian is part of an elite coding group for the National Security Agency.

Kira, a typical teenager in many ways, shows courage, wit and resourcefulness while being held captive in a closet in a desolate area by a trio of professionals, Jacques, Lilly and Rodrigo.

“She could see now how carefully they had set her up. Lilly was the key. He’s with his sister, yeah she’s a jerk but it’s more proof he’s safe. Then Lilly picked up Rodrigo. Suddenly Kira was with three strangers, not just one.

“Go with the idea Jacques had targeted her,” Kira thinks in her closet. “Why her? Okay, he said for the money. Maybe so. But if not … she was nobody. Tony was nobody. Her dad was a coder for the National Security Agency along with about a thousand other guys. But her mom … her mom wasn’t nobody. Rebecca Unsworth ran the Russia counterintelligence desk at the Federal Bureau of Investigation.”