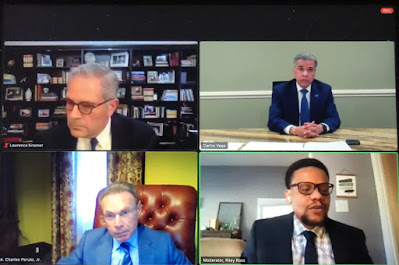 Stu Bykofsky offers his take on the Zoom Philadelphia district attorney debate in a post on his website.

Although Frank Rizzo has been dead 30 years, Krasner mentioned him four times during Monday afternoon’s Zoom district attorney debate sponsored by the Philadelphia Bar Association. He waved the name like an amulet to ward off evil.

Then, on the subject of immigration (which was actually about illegal immigration) Krasner reached into his magic bag for a Donald J. Trump red herring, saying he and Mayor Kenney fashioned a document to withdraw cooperation with ICE. They did that because of Trump’s, you know, horrible and inhumane policies.

Except for this: It was nimrod Mayor Michael Nutter who was browbeaten by Open Border types into ending the agreement with ICE, and this happened under President Barack Obama, the deporter-in-chief, he was sometimes called.

This question asked by moderator Riley Ross was would the candidates maintain Philadelphia’s Sanctuary City status.

Krasner would, of course, because there are few laws he likes to enforce. Sadly, his Democratic challenger, Carlos Vega, agreed, after some double-talk about how illegals are “victimized twice.” No, they are the perps, not the victim.

Republican candidate Chuck Peruto said he wasn’t much interested in prosecuting garden variety illegals, but if they committed a felony, they’d get time — before being deported.

Wow! Enforcement would a relief, because Philly policy is to “protect” all illegals — even those who have committed a felony.

… In opening comments, Krasner said he should be reelected because, “promises made, promises kept.”

Odd that he hates Trump but stole a campaign motto.

Peruto said, yeah, you kept promises, but they made things worse. He also called Krasner a “politician” for dredging up Rizzo, who has nothing to do with anything. Peruto certainly did stand alone.

Vega said the city is “more dangerous” than at any time in the last 30 years and victims need a protector who “looks like them,” and told a politically incorrect truth when he said most homicide victims in Philly were people of color.

Krasner said crime is up everywhere, even in Republican cities, so he can’t blamed for the crime spike here.

Vega said his failure to prosecute and to reduce charges helped explain the rising crime rate, and Peruto said Krasner’s policy of not prosecuting shoplifting crimes under $500 promoted “Christmas shopping,” of the illegal kind.

Defense attorney Peruto has been a life-long Democrat who is running to defeat Krasner if he gets past underdog Vega in the primary.

… Does Krasner under-charge on many crimes?

“Absolutely,” said Peruto, while Vega pussyfooted. Peruto talked about everything from gun violence to car break-ins.

Vega recovered by citing 180 gun arrests, with 114 dismissed by the D.A. in a city that supposedly has a gun crisis. That might have been his strongest point.

Krasner’s was his charge that Vega refiled charges against a convict that Krasner’s conviction integrity unit got sprung, and Vega used the testimony of two officers who allegedly coerced confessions.

The biggest surprise from Peruto was his belief that those convicted, having gone through trial and appeals, were rarely not guilty.