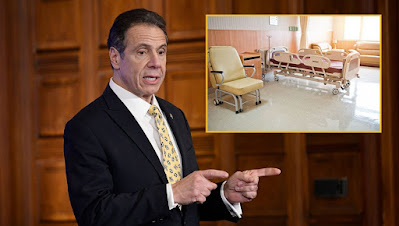 ALBANY, NY—New York Governor Andrew Cuomo's political career is in freefall after new allegations of sexual misconduct from several women. In a desperate attempt to divert attention from the embarrassing sex scandal, Cuomo took to the airwaves today to remind everyone of the time he killed a bunch of seniors in nursing homes.

"Listen people-- I know there are some accusations against me out there, but can we focus on the real issues?" said Cuomo to a roomful of reporters who had recently received a memo telling them it was time to stop protecting the governor.

"I mean, there's this whole thing with New York nursing homes! Wow! Looks pretty bad, huh? I guess some people died! Some of you should forget this whole #MeToo scandal thing and look into that!"