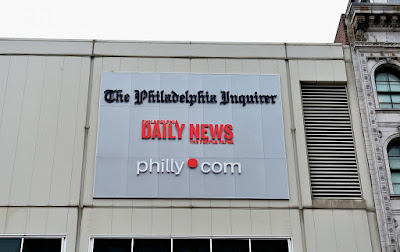 So it was sad to read Ralph Cipriano’s piece on BigTrial.net about how the once great newspaper is slanting their news coverage for Philly DA Larry Krasner.

We all knew The Philadelphia Inquirer was in the tank for District Attorney Larry Krasner.

For the last couple of years, the Inquirer has gone out of its way to censor all negative news about our progressive D.A. and his lenient, criminal-friendly policies that have resulted in scores of armed and dangerous criminals being released from jail, so they can reek more mayhem.

Ever wonder why Philadelphia every day is setting new records for shootings and murders? Look no further than the disastrous policies of Larry Krasner.

But don't expect the Inquirer to ever tell you that. Especially since Krasner faces a tough reelection battle in the May 18th Democratic primary against Carlos Vega, who happens to be a real prosecutor.

This morning, however, the Inquirer committed a few new crimes against journalism. First, they printed a story that said the district attorney's office was withdrawing three sexual assault charges against Carl Holmes, a former chief inspector in the police department.

But then the Inquirer deliberately omitted the main reason why Common Pleas Court Judge Karen Simmons tossed those charges -- on Jan. 7th, the judge caught Assistant District Attorney Rachel Black lying about an alleged victim's availability to appear in court.

Next, the Inquirer not only refused to report Assistant District Attorney Black's prosecutorial misconduct, they also printed a new alibi from the D.A.'s office to explain why the alleged victim didn't show up in court, an alibi that Black, as well the alleged victim herself, had never previously made.

It's called slanting the news, and that's what the Inquirer is deliberately doing to ensure that Krasner gets reelected, so that his progressive policies can result in more shootings and more murders.