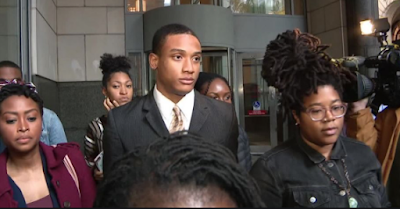 Ralph Cipriano at BigTrial.net takes Philly DA Larry Krasner to task for his mishandling of a “slam- dunk” murder case.

When Michael White was going on trial for the murder of Sean Schellenger, District Attorney Larry Krasner had no time to meet with the victim's mother.

So on the Friday before jury selection was to begin on Monday, Krasner had to tell Linda Schellenger during a hastily arranged phone call that he was planning to drop a third-degree murder charge against White.

When Linda Schellenger protested that Krasner should let the jury decide whether White committed murder or not, the D.A. exploded.

"He literally yelled at me on the phone," Linda Schellenger recalled. He admonished her for "questioning his authority and his intellect," she said, before telling her, "This is my decision."

Before trial, Linda Schellenger had called the D.A.'s office for five straight days trying to set up a meeting with Krasner, but he never called her back.

But more than a year before the case went to trial in October 2019, the D.A. huddled behind closed doors for more than three hours with the accused killer and his legal defense team composed of four lawyers and an investigator.

In contrast to how he treated Linda Schellenger, Krasner had plenty of time -- and sympathy -- for Michael White.

"This is not going to be some kind of hard cross examination," Krasner began by telling White. "Uh, we'll listen to you for whatever that takes . . ."

During that July 25, 2018 meeting between White and the D.A., Krasner came across like a public defender or the career defense lawyer that he was for 30 years before he was elected D.A. At times Krasner sounded like a social worker; anything but a prosecutor.

But when he met with White, Krasner was the sitting district attorney of Philadelphia who was about to tank a high-profile, slam-dunk murder case.

The session between Krasner, White and his lawyers was technically known as a proffer.

A proffer is an interview conducted pursuant to a written agreement drawn up between a prosecutor and a criminal defendant that allows the defendant to tell the government about his knowledge of a crime without suffering the usual consequences.

The proffer comes with the assurance that if the defendant subsequently testifies as a prosecution witness, as long as he tells the truth and sticks to the same story, the defendant doesn't have to worry about what he said at the proffer being used against him in court.

A prosecutor will typically arrange a proffer with a defendant to find out if he's willing to give up any unindicted co-conspirators, or any previously unknown details of a crime.

Prosecutors will tell you that there was no reason to conduct a proffer with White, because he acted alone, there were eyewitnesses, and the entire crime was caught on video. Hence, there wasn't much to learn by meeting behind closed doors with the accused killer.

It was highly unusual for a sitting district attorney to personally involve himself in a high profile murder case. It was also unusual for the D.A.'s office to voluntarily share with White all of the prosecution's evidence that they intended to use against him at trial.

At a proffer, the normal playbook for a prosecutor is to have the defendant walk in naked, knowing nothing about what the prosecution knows or doesn't know. And then it's time for the defendant to start talking, and give up everything he knows about the crime.

But that's not the way Larry Krasner played the game. The evidence against White that the D.A. voluntarily shared with the accused killer and his team of lawyers included statements from witnesses, as well as a cell phone video taken by a bystander that showed White plunging a black, foot-long serrated knife with a seven-inch blade into the back of an unarmed Sean Schellenger.

The knife sunk so deep, some seven inches, that it pierced Schellenger's aorta.

While Schellenger bled to death in Rittenhouse Square, White ran away, catching a subway to his aunt's house. Along the way, he threw his bloody t-shirt in a trash can, and the bloody knife that was the murder weapon on top of a roof.