Andrew McCarthy: What the Media Didn’t Tell You About The Chauvin Case 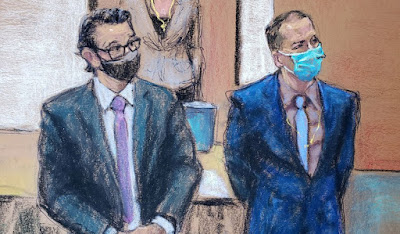 ...Not a shred of evidence was introduced at the trial that Derek Chauvin is a racist. None. There was nothing in the weeks of testimony that even hinted at such a thing. The prosecutors who aggressively urged the jury to convict Chauvin of murder never intimated that racism played any role in the crimes. They convincingly argued that he was a bad cop, not a racist cop.

... Had the police searched the car, which they would have had probable cause to do, they would have found at least one more counterfeit bill and illegal narcotics (which were found later). Floyd had methamphetamine and fentanyl in his system (enough of the latter, potentially, to be fatal to a person who had not built up a tolerance to it by years of opiate abuse). Police also later found pills containing these two controlled substances with Floyd’s saliva on them.

… It was thus rational for the jury to find that Chauvin’s restraint of Floyd, though it started out as a lawful use of force, (a) evolved into a criminal assault, and (b) demonstrated “depraved indifference” as the judge defined that term in his instructions on the law. These were the findings the jury had to make to find Chauvin guilty on the two murder counts (second- and third-degree murder). Furthermore, in drawing those conclusions, the jury necessarily found that Chauvin was culpably negligent, which is the finding that supports a second-degree manslaughter conviction.

…Nevertheless, the case does not stand as a totem of systemic racism. To the contrary, the evidence proves that Chauvin was individually culpable. Far from being emblematic of an inherently racist law-enforcement agency, Chauvin’s actions grossly violated the standards of a police department that is committed to even-handed enforcement of the law and, from the top down, to diversity and amicable relations with the community.

… And yet these are the facts: George Floyd was arrested not based on a police assumption but in response to a credible citizen complaint that he committed a crime, coupled with obvious evidence that he was high on drugs while operating a car. The police never choked him. And there is no evidence that racism motivated the police to mistreat him.