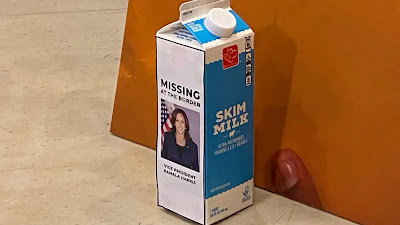 As Fox News’ Mike Wallace noted in a video clip, Vice President Harris knows the border situation is a mess and she doesn’t want her fingerprints on it.

(I suspect a savvy Biden political operative suggested giving her this task as a way to neutralize Biden’s once and future rival).

Ronn Blitzer at FoxNews.com offers a piece on Harris and the border.

House Republicans slammed Vice President Kamala Harris' failure to visit the southern border since being tapped to play a key role in the migrant crisis, putting her face on a milk carton to demonstrate that she has been missing.

House Minority Whip Rep. Steve Scalise, R-La., stressed the need for Harris to go to the border to observe for herself the consequences of the Biden administration's policies, such as the overcrowding of unaccompanied migrant children in federal facilities.