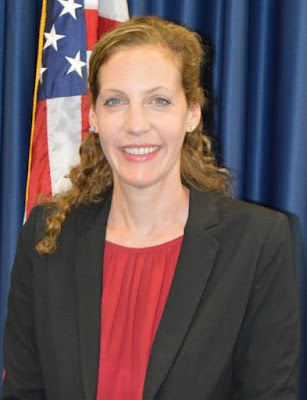 PHILADELPHIA – During a press conference held on Independence Mall this morning, Acting United States Attorney Jennifer Arbittier Williams (seen in the above photo) was joined by senior officials from more than 15 federal agencies operating in the Philadelphia area to announce their collective effort to combat the raging epidemic of violence in the city and support the work of the Philadelphia Police Department, which was represented at the event by Commissioner Danielle Outlaw. In a letter addressed to the The citizens of the Eastern District of Pennsylvania, federal leaders pledged an “All Hands On Deck” effort from their respective agencies to identify, investigate and hold responsible perpetrators of violent crime.

“The violence in Philadelphia affects all of us, not just residents of the city – millions of people travel in and out for work, school, medical care and more. The mission of the federal agencies gathered here today is to keep our entire District safe in partnership with local authorities,” said Acting U.S. Attorney Williams. “That is why we are here today: to announce that together, we are ‘All Hands On Deck’ to stop the violence and support the Philadelphia Police Department in their work. Violent criminals should be on notice that we are re-doubling our efforts and we are coming for you. We have had enough.”

“Our citizens, our children, and even our officers are being victimized as a result of the continued violence in the city. Enough is enough. The PPD and our federal partners recognize the gravity of the challenges that we face. We must continue to work together—citizens, police, and stakeholders - in order to make headway against the scourge of gun violence. We truly are in support of and need ‘All Hands On Deck’,” stated Commissioner Danielle Outlaw.

To the Citizens of the Eastern District of Pennsylvania:

The current violence in Philadelphia affects all of us. Over 1.5 million people live in the City, and millions more travel into the City for work or school, to receive medical care, and to enjoy the City’s parks and cultural attractions. The impact of the ongoing violence is felt in Philadelphia as well as far beyond the City’s limits.

As federal law enforcement, our mission is to keep our entire District safe, and the current state of affairs puts the safety and well-being of everyone in the Eastern District of Pennsylvania at risk. Murders and shootings in Philadelphia continue to rise at an alarming pace. In 2020, 499 people were murdered—a 40% increase from the 356 homicides that occurred in 2019. And in 2021, we are on pace to surpass 600 murders, a horrifying milestone.  Importantly, these numbers do not tell the whole story because they do not include the victims of violence who were lucky enough to survive, nor do they address the harm caused to Philadelphia’s commerce and spirit as people find themselves afraid to venture outside after dark.

These statistics are grim. We cannot allow violent criminals to hold Philadelphia hostage.

That is why we, the undersigned leaders of federal law enforcement agencies, have come together to deliver this message: We are outraged and have had enough.

Many of the federal agencies below investigate violent crime as part of their mission. But even those that do not have joined this letter to show their commitment to the cause. We are joining together, like never before, to use every tool at our disposal to find and arrest the most dangerous criminals. From obtaining search warrants, to reviewing cell phone records and ballistics evidence, to mobilizing our network of sources, we are sharing information and working every angle—standing shoulder to shoulder with Philadelphia police—to do all that we can to reverse this trend. And when we find those who are committing violence, we will prosecute them and obtain stiff sentences when they are convicted.

We know what the City needs: it needs All Hands On Deck to stop the violence. And that is what we are committed to provide.