My Counterterrorism Magazine Q&A With Brad Taylor, Former U.S. Army Special Operator And Author Of 'American Traitor,' One Rough Man,' And Other Thrillers 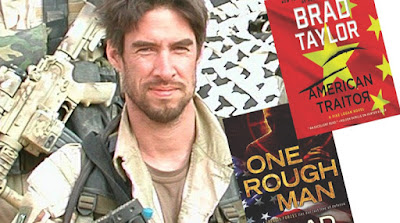 Counterterrorism magazine published my Q&A with Brad Taylor, former U.S. Amy special operator and the author of American Traitor, One Rough Man and other thrillers.

You can read the pages below (and click to enlarge) or via the text below: 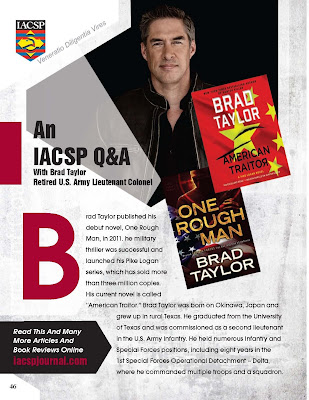 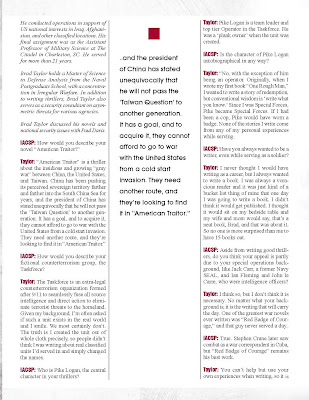 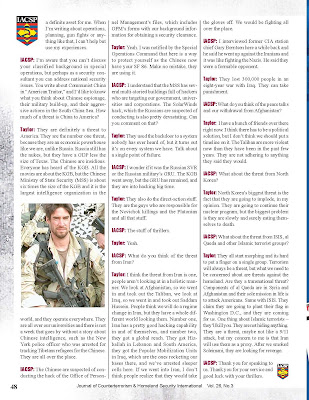 Brad Taylor published his debut novel, One Rough Man, in 2011. he military thriller was successful and launched his Pike Logan series, which has sold more than three million copies. His current novel is called “American Traitor.” Brad Taylor was born on Okinawa, Japan and grew up in rural Texas. He graduated from the University of Texas and was commissioned as a second lieutenant in the U.S. Army Infantry. He held numerous Infantry and Special Forces positions, including eight years in the 1st Special Forces Operational Detachment – Delta, where he commanded multiple troops and a squadron.

He conducted operations in support of US national interests in Iraq, Afghanistan, and other classified locations. His final assignment was as the Assistant Professor of Military Science at The Citadel in Charleston, SC. He served for more than 21 years.

Brad Taylor holds a Master of Science in Defense Analysis from the Naval Postgraduate School, with a concentration in Irregular Warfare. In addition to writing thrillers, Brad Taylor also serves as a security consultant on asymmetric threats for various agencies.

IACSP: How would you describe your novel “American Traitor?”

Taylor: “American Traitor” is a thriller about the insidious and growing “gray war” between China, the United States, and Taiwan. China has been pushing its perceived sovereign territory farther and farther into the South China Sea for years, and the president of China has stated unequivocally that he will not pass the ‘Taiwan Question’ to another generation. It has a goal, and to acquire it, they cannot afford to go to war with the United States from a cold start invasion. They need another route, and they’re looking to find it in “American Traitor.”

IACSP: How would you describe your fictional counterterrorism group, the Taskforce?

Taylor: The Taskforce is an extra-legal counterterrorism organization formed after 9/11 to seamlessly fuse all source intelligence and direct action to eliminate terrorist threats to the homeland. Given my background, I’m often asked if such a unit exists in the real world and I smile. We most certainly don’t. The truth is I created the unit out of whole cloth precisely, so people didn’t think I was writing about real classified units I’d served in and simply changed the names.

IACSP: Who is Pike Logan, the central character in your thrillers?

Taylor: Pike Logan is a team leader and top tier Operator in the Taskforce. He was a ‘plank owner’ when the unit was created.

IACSP: Is the character of Pike Logan autobiographical in any way?

Taylor: “No, with the exception of him being an operator. Originally, when I wrote my first book “One Rough Man,” I wanted to write a story of redemption, but conventional wisdom is ‘write what you know.’ Since I was Special Forces, Pike became Special Forces. If I had been a cop, Pike would have worn a badge. None of the stories I write come from any of my personal experiences while serving.

IACSP: Have you always wanted to be a writer, even while serving as a soldier?

Taylor: I never thought I would have writing as a career, but I always wanted to write a book. I was always a voracious reader and it was just kind of a bucket list thing of mine that one day I was going to write a book. I didn’t think it would get published. I thought it would sit on my bedside table and my wife and mom would say, that’s a neat book, Brad, and that was about it. So no one is more surprised than me to have 15 books out.

IACSP: Aside from writing good thrillers, do you think your appeal is partly due to your special operations background, like Jack Carr, a former Navy SEAL, and Ian Fleming and John le Carre, who were intelligence officers?

Taylor: I think so, but I don’t think it is necessary. No matter what your background is, it is the writing that will carry the day. One of the greatest war novels ever written was “Red Badge of Courage,” and that guy never served a day.

IACSP: I’m aware that you can’t discuss your classified background in special operations, but perhaps as a security consultant you can address national security issues. You write about Communist China in “American Traitor,” and I’d like to know what you think about Chinese espionage, their military build-up, and their aggressive actions in the South China Sea. How much of a threat is China to America?

Taylor: They are definitely a threat to America. They are the number one threat, because they are an economic powerhouse like we are, unlike Russia. Russia still has the nukes, but they have a GDP less the size of Texas. The Chinese are insidious. Everyone has heard of the KGB. All the movies are about the KGB, but the Chinese Ministry of State Security (MSS) is about six times the size of the KGB and it is the largest intelligence organization in the world, and they operate everywhere. They are all over our universities and there is not a week that goes by without a story about Chinese intelligence, such as the New York police officer who was arrested for tracking Tibetans refugees for the Chinese. They are all over the place.

IACSP: The Chinese are suspected of conducting the hack of the Office of Personnel Management’s files, which includes OPM’s forms with our background information for obtaining a security clearance.

Taylor: Yeah. I was notified by the Special Operations Command that here is a way to protect yourself as the Chinese now have your SF 86. Make no mistake, they are using it.

IACSP: I understand that the MSS has several multi-storied buildings full of hackers who are targeting our government, universities and corporations. The SolarWinds hack, which the Russians are suspected of conducting is also pretty devastating. Can you comment on that?

Taylor: They used the backdoor to a system nobody has ever heard of, but it turns out it’s on every system we have. Talk about a single point of failure.

IACSP: I wonder if it was the Russian SVR or the Russian military’s GRU. The KGB went away, but the GRU has remained, and they are into hacking big time.

Taylor: They also do the direct-action stuff. They are the guys who are responsible for the Novichok killings and the Plutonian and all that stuff.

IACSP: The stuff of thrillers.

IACSP: What do you think of the threat from Iran?

Taylor: I think the threat from Iran is one, people aren’t looking at in a holistic manner. We look at Afghanistan, so we went in and took out the Taliban, we look at Iraq, so we went in and took out Saddam Hussein. People think we will do a regime change in Iran, but they have a whole different world looking them. Number one, Iran has a pretty good hacking capability in and of themselves, and number two, they got a global reach. They got Hizballah in Lebanon and South America, they got the Popular Mobilization Units in Iraq, which are the ones rocketing our bases there, and we’ve arrested sleeper cells here. If we went into Iran, I don’t think people realize that they would take the gloves off. We would be fighting all over the place.

IACSP: I interviewed former CIA station chief Gary Berntsen here a while back and he said he went up against the Iranians and it was like fighting the Nazis. He said they were a formable opponent.

Taylor: They lost 300,000 people in an eight-year war with Iraq. They can take punishment.

IACSP: What do you think of the peace talks and our withdrawal from Afghanistan?

Taylor: I have a bunch of friends over there right now. I think there has to be a political solution, but I don’t think we should put a timeline on it. The Taliban are more violent now than they have been in the past few years. They are not adhering to anything they said they would.

IACSP: What about the threat from North Korea?

Taylor: North Korea’s biggest threat is the fact that they are going to implode, in my opinion. They are going to continue their nuclear program, but the biggest problem is they are slowly and surely eating themselves to death.

IACSP: What about the threat from ISIS, al Qaeda and other Islamic terrorist groups?

Taylor: They all start morphing and its hard to put a finger on a single group. Terrorism will always be a threat, but what we need to be concerned about are threats against the homeland. Are they a transnational threat? Components of al Qaeda are in Syria and Afghanistan and their sole mission in life is to attack Americans. Same with ISIS. They claim they are going to plant their flag in Washington D.C., and they are coming for us. One thing about Islamic terrorists – they’ll kill you. They are not hiding anything. They are a threat, maybe not like a 9/11 attack, but my concern to me is that Iran will use them as a proxy. After we smoked Soleimani, they are looking for revenge. 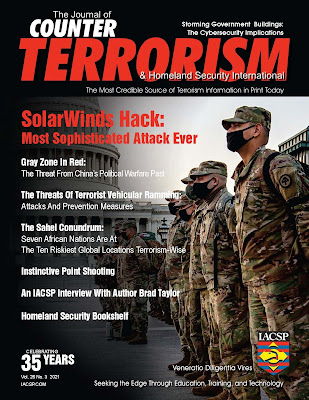