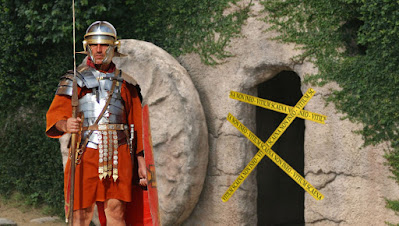 JERUSALEM—Roman authorities are investigating controversial religious leader Jesus of Nazareth for violating the Empire's clear "stay in tomb" order. After crucifying him and laying him in the tomb, Roman guards put Him under strict orders to stay there and not come back, rising victorious over sin and death. But Jesus, answering to a higher authority, refused to stay dead and busted out of the tomb, establishing a kingdom that would never end -- again, in clear violation of the government's orders.

"Jesus is a dangerous rebel, refusing to bend the knee to Caesar and not abiding by the law of sin and death," said one Roman official. "He clearly broke the law by leaving the tomb, and we're going to be issuing a citation and placing him under mandatory quarantine for these crimes."

After coming into contact with many large groups over the course of approximately 40 days, Jesus ascended into heaven and is currently thought to be reigning on high.

Authorities are also investigating Him for planning to gather with a large multitude of every tribe, tongue, and nation. He says he currently has no plans to obey any earthly king on the matter, pressing ahead with the gathering of those who believe He died and rose again and trust Him alone for their salvation.