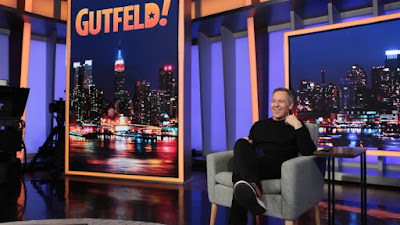 I used to watch and enjoy Greg Gutfeld’s Red Eye humor show at 3 am on Fox News, and I’ve occasionally watched him on The Five. He is intelligent, clever and funny.

And beginning tonight, Greg Gutfeld will air a comedy show at 11 pm, Gutfeld! on Fox News.

I’ve set my DVR to record the show.

Ted Johnson at Deadline.com offers a piece on the new program.

As much as the news channel might be presenting the show as an alternative from the right, Gutfeld’s biggest challenge is the same one that all of the other shows face: being funny, night after night.

As many have noted, Fox News’ programming of Gutfeld! — as the April 5-premiering show is called — is another example of how the network has been expanding its nighttime doses of opinion, in the post-Donald Trump presidency. Fox Corp. CEO Lachlan Murdoch suggested last month that the job of the network during Joe Biden’s presidency would be to act as the loyal opposition, while outlets like Newsmax have made a run for the disaffected Trump voter.