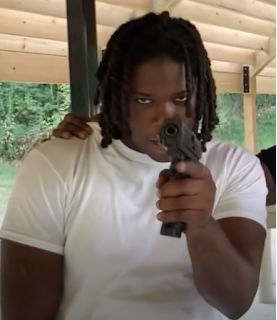 Ralph Cipriano at Bigtrial.net offers a piece on a former Philadelphia detective who is suing Philly DA Larry Krasner.

In an ongoing whistleblower's lawsuit in U.S. District Court, a former Philadelphia police detective charges that the D.A.'s office tampered with an investigation into the police shooting of Walter Wallace Jr., by trying to force another detective to falsify an affidavit of probable cause.

According to an amended complaint filed April 8th by Detective Derrick "Jake" Jacobs, Assistant District Attorney Vincent Corrigan wanted Detective Daphne Smith to rewrite the affidavit to eliminate Wallace's aggressive actions toward police on the day they shot him 14 times.


On Oct. 26, 2020, a next-door neighbor and Wallace's sister called 911, frantically seeking help because the knife-wielding Wallace was attacking his mother and father.

When the cops got there, Wallace came at two officers with the knife. Within the next minute, despite being told ten times by the cops, who were in retreat, to drop the knife, Wallace kept pursuing the cops out in the street and kept brandishing the knife. So the cops opened fire and killed him.

When Detective Smith refused to rewrite the affidavit, Jacobs wrote, ADA Corrigan went to Detective Smith's superior, Lt. Jason Hendershot, and the result was that Hendershot "altered and falsified" the affidavit to remove any of Wallace's aggressive actions, thereby removing any legal justification for the cops to open fire.

In his federal lawsuit seeking $50 million in damages, Jacobs, acting as his own attorney, has charged District Attorney Larry Krasner and Assistant D.A. Tracy Tripp with conspiring to maliciously prosecute him because he similarly refused to change his testimony about his investigation into another racially-charged officer-involved shooting.

Last October, U.S. Judge Harvey Bartle III granted the city's request to dismiss Jacobs' lawsuit for allegedly not properly following the federal rules for civil procedure. But Jacobs filed an appeal that prevailed last Dec. 1st with the Third Circuit Court of Appeals, and his lawsuit was reinstated.


What does the D.A.'s office have to say in response to these allegations? As they have for the past 20 months, Larry "Stonewall" Krasner and Jane 'The Mute" Roh did not respond to a request for comment.