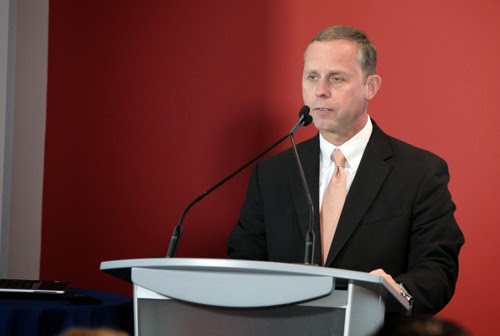 The FBI web site offers the below piece:

“Partnership is the key to any type of [long-lasting] cyber investigation and cyber team work,” said Executive Assistant Director Robert Anderson during a joint FBI/U.S. Secret Service presentation in Washington, D.C. on October 20, 2014 before the Financial Services Roundtable (FSR), an advocacy organization for the U.S. financial services industry. The event was held as part of National Cyber Security Awareness Month."

And Anderson wasn’t just talking about our growing partnership with the Secret Service—with whom the Bureau works collaboratively on cyber crime matters. He was also referring to the importance of collaborating with private sector companies, many of whom were represented in the audience.

During the event, joint teams of FBI and Secret Service agents discussed a number of various cyber-related topics to educate and raise awareness of the cyber threat. Those topics included the extent of the problem (more than 500 million personal records stolen over the past 12 months, according to public sources), various stages of a hack (from reconnaissance efforts to the actual data theft), our outreach efforts to the private sector (e.g., InfraGard, National Cyber Forensics and Training Alliance), and Operation Clean Slate (the Bureau’s innovative and collaborative approach against the most serious botnet threats).

Also discussed were several significant cyber investigations—including operations Trident Breach, Coreflood, Ghost Click, and GameOver Zeus—that owed much of their success to the assistance provided by our private sector partners.

Other key players in these investigations—and in many of our cyber investigations overall—are our international law enforcement partners. Their support is vital because many of the cyber criminals that victimize American financial institutions, other businesses, and the American public operate outside of the U.S. Said FBI Assistant Director Joseph Demarest, Jr., “Wherever these actors sit in the world, we’re going after them.”

Demarest also warned financial industry representatives that a cyber intrusion “is going to happen” to their company at some point and he advised them to “have a plan” before it happens. That plan should include an internal response team and an already-established cyber point of contact with the U.S. government.

Note: You can read my interview with FBI Special Agent and InfraGard coorinater John Cheeson via the below link: