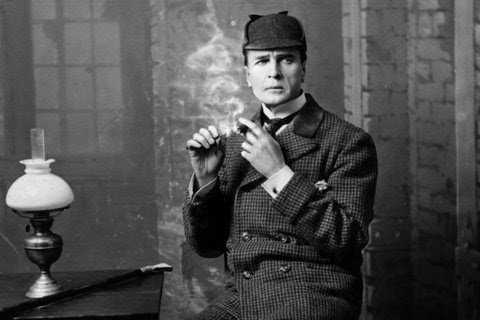 Melissa Locker at vanityfair.com reports on the finding of a lost Sherlock Holmes film with the original stage actor who defined the character during his time.

Long before Benedict Cumberbatch or Robert Downey Jr. played the famed detective, Sherlock Holmes was the domain of American actor and playwright William Gillette, who left an indelible mark on the character.

Now, some sleuthing has uncovered the only known film capturing Gillette's portrayal of the Baker Street detective, which the San Francisco Silent Film Festival calls a "vital missing link in the portrayal of Holmes on film."

The silent movie, made in 1916 and titled Sherlock Holmes, combines elements of several Sherlock stories. It had been lost for decades, misfiled in the vaults of the Cinémathèque Française film archive in Paris.

The newly rediscovered film has French subtitles and annotations implying that the black-and-white film was meant to be colorized before being distributed to French markets. According to the BBC, staff at the archive came across the long-lost film while cataloguing the thousands of nitrate film reels in its collection.

“William Gillette's Sherlock Holmes has ranked among the holy grails of lost film,” said film restorer and San Francisco Silent Film Festival board president Robert Byrne, speaking to The Hollywood Reporter. “Audiences are going to be blown away when they see the real Sherlock Holmes onscreen for the first time.”

Paul Davis is a writer who covers crime. He has written extensively about organized crime, street crime, sex crime, cyber crime, drug crime, white collar crime, crime fiction, crime prevention, espionage and terrorism. His 'On Crime' column appears weekly in the Washington Times. He is also a regular contributor to Counterterrorism magazine. His work has also appeared in the Philadelphia Inquirer, Philadelphia Daily News and other newspapers, magazines and online publications. Paul Davis has attended police academy training, gone out on patrol with police officers, accompanied detectives as they worked cases, accompanied narcotics officers on drug raids, observed criminal court proceedings and visited jails and prisons. He has covered street riots, mob wars and murder investigations. Paul Davis' online "Crime Beat" column offers his Q&As with cops, crooks, crime writers and others. Paul Davis has been a student of crime since he was a 12-year-old aspiring writer growing up in South Philadelphia. He enlisted in the U.S. Navy when he was 17 in 1970 and served on the aircraft carrier USS Kitty Hawk during the Vietnam War. He also served two years on the Navy harbor tugboat USS Saugus at the U.S. nuclear submarine base at Holy Loch, Scotland. He went on to perform security work as a Defense Department civilian employee and he later became a writer. You can read Paul Davis' On Crime and Crime Beat columns, crime fiction and magazine and newspaper pieces on this website. You can also read his full bio by clicking on the above photo.