The "JFK" Of Crack: "Kill The Messenger" Film Turns Journalist Into Unconvincing Hero 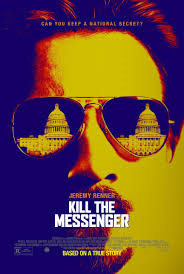 Kyle Smith at the New York Post debunks the film Kill the Messenger.

In 1996, the subject of “Kill the Messenger,” journalist Gary Webb, published stories that created the impression that the CIA was behind the crack epidemic. Maxine Waters and Louis Farrakhan believed him. Webb’s own newspaper, the San Jose Mercury News, then re-reported the story and delicately backed away from it. Later it accepted his resignation.

Webb’s key sources then called him a liar to reporters for Webb’s own paper, the San Jose Mercury News, which accepted his resignation.

As the filmmakers spin Webb’s story out of visits with drug lords and convicts, “Kill the Messenger” tries to be the “JFK” of crack, but offers only shrill self-righteousness to answer the crazed energy of Oliver Stone’s masterpiece of deceit.