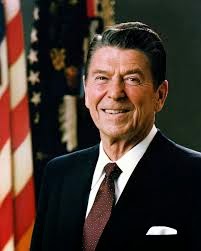 John Fund at the National Review looks back at President Ronald Reagan's great 1964 speech that launched his political career. The speech is applicable today.

Today marks the 50th anniversary of what has become known as simply “The Speech.”

The actual title Ronald Reagan gave to the address with which he electrified a nation during a 30-minute broadcast for the failing Goldwater campaign was “A Time for Choosing.” Goldwater lost a week later to Lyndon Johnson, but conservative presidential politics had a North Star in Reagan after that. “It defined conservatism for 50 years,” Reagan biographer Craig Shirley concluded.

Washington Post columnist David Broder wrote that the night of Reagan’s address represented “the most successful political debut since William Jennings Bryan” and his “Cross of Gold” speech in 1896. “I didn’t know it then,” Reagan wrote in his 1991 autobiography, “but that speech was one of the most important milestones of my life.”

... In the middle of the Cold War Reagan forthrightly said liberals refused to acknowledge that “There is no argument over the choice between peace and war, but there is only one guaranteed way you can have peace — and you can have it in the next second — surrender.”

You can read the rest of the piece and watch a video of the great speech via the below link: