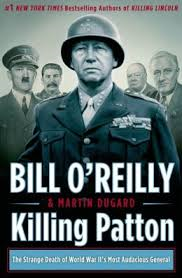 “If you have read ‘Killing Kennedy,’” author and TV commentator Bill O'Reilly reminds his readers, “you know that Martin Dugard and I are not conspiracy theorists. We write from a factual point of view, with no axes to grind.”

Thus, in the afterword of “Killing Patton: The Strange Death of World War II’s Most Audacious General” Mr. O'Reilly seeks to assure those who have just read this most recent volume in the co-authored (with Mr. Dugard) “killing” series that their findings are simply facts, not hype.

Careful shoe-leather detective work buttressed by research, access to decades-old correspondence and never-before publicized interrogations of sources from around the world have combined to give readers “Killing Patton.”

The famous tank commander had the proverbial bull’s-eye on his back from the day it was known that he did not trust our World War II “ally,” Marshal Josef Stalin. That was at a time when official U.S. government policy was to lure Stalin’s Soviet Union to join other allies (postwar) in forming and operating what became the United Nations.

Gen. Patton’s complaints included an order that American troops hold back on entering Berlin from the west until the Soviet troops could arrive in Germany from the east.