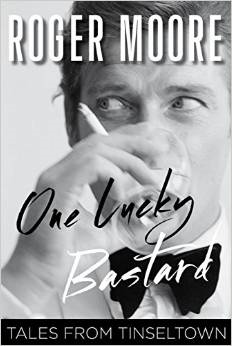 The former star of seven James Bond films and The Saint and The Persuaders on TV is also the author of a new memoir called One Lucky Bastard: Tales From Tinseltown.

As I noted on this site before, I don't care for Sir Roger Moore's lighthearted portrayal of Ian Fleming's iconic character James Bond, but as a teenager I very much enjoyed him as Leslie Charteris' character Simon Templar in The Saint on TV. I also liked him in The Persuaders.

According to Biography.com, Sir Roger Moore was born on October 14, 1927, in London, England.

You can learn more about Sir Roger Moore via the below link:

You can also watch Moore as the cool Simon Templar and the cool intro to The Saint, with Edwin Astley's cool theme song, via the below link:

http://www.youtube.com/watch?v=QIEblgU_z50
Posted by Paul Davis at 4:17 AM