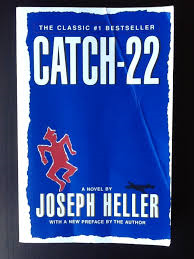 I've read Joseph Heller's comic classic Catch-22 three times in my life. I was a teenager in high school the first time I read Catch-22 and I thought the WWII novel was funny.

The second time I read the novel was a few years later when I was an 18-year-old sailor serving aboard an aircraft carrier during the Vietnam War. Unlike Heller at the time, I was a military hawk and I supported the U.S. efforts in Vietnam. Yet I enjoyed the anti-war novel even more the second time I read it, as I recognized more clearly and intimately some of the absurdities of military life and war.

The third and last time I read Catch-22 I was in my 40s and I was serving as the civilian administrative officer of  a Defense Department Command in Philadelphia. I was working closely with high-ranking military officers, so from this additional perspective, I got a kick out of Heller's satiric look at command leadership.

Today I remain a military hawk and I still don't subscribe to Heller's world-view. But now that I've left the Defense Department and I cover the military as a writer, perhaps it is time to once again read Catch-22.

Robert McCrum at the British newspaper the Guardian takes a look back at the novel, as he ranks Catch-22 at number 80 in the newspaper's list of 100 Best Novels.

In 1962, writing in the Observer, Kenneth Tynan saluted Catch-22 as “the most striking debut in American fiction since Catcher in the Rye.” Within a year, he had been joined, in a chorus of praise, by writers as various as Harper Lee, Norman Mailer and Graham Greene. More than 50 years later, this brilliant novel still holds an unforgettable comic grip on the reader.

“It was love at first sight,” Heller begins, setting the tone for everything that follows. “The first time Yossarian saw the chaplain he fell madly in love with him.”

Bombardier Yossarian is in a military hospital with a pain in his liver that’s not quite jaundice. Hinting at the famous “catch” of the title, Yossarian can be treated if he’s got jaundice, but discharged if he hasn’t. If neither, then he’s in a Kafkaesque limbo, where he’s at the mercy of fate.

This anticipates the notorious conditions under which a combat airman can be grounded: you have to be insane before you’re excused flying combat missions, but if you don’t want to fly any more missions that proves you are not insane. The OED defines this “Catch-22” as “a difficult situation from which there is no escape, because it involves mutually conflicting or dependent conditions”, which is a very dull way to describe the absurd crux whose mad logic exhilarates every page of one of the greatest war novels of all time.

Bombardier Yossarian, who is at odds with his own side as much as with the enemy, is an unforgettable second world war Everyman, whose cat-and-mouse relationship with a cast of deranged oddballs – Milo Minderbinder, Major Major and Doc Daneeka – is played out, amid mounting absurdity, on the island of Pianosa in the Mediterranean. It’s 1944, and Yossarian has figured out that “the enemy is anybody who is going to get you killed, no matter which side he’s on”.

Inevitably, the high comedy with which the novel opens eventually modulates into a darker, bleaker humour, and movingly, it’s the tragic death of rear-gunner Snowden which reminds us that Heller’s merriment is the kind of gallows laughter that’s inspired by the horror of war.

Note: I was disappointed in Mike Nichol's 1970 film adaptation of Catch-22, despite the film's fine cast. In contrast, I thought Robert Altman's 1970 film M*A*S*H was a fine adaptation of Richard Hooker's comic novel.

You can read Roger Ebert's review of the film Catch-22 via the below link: