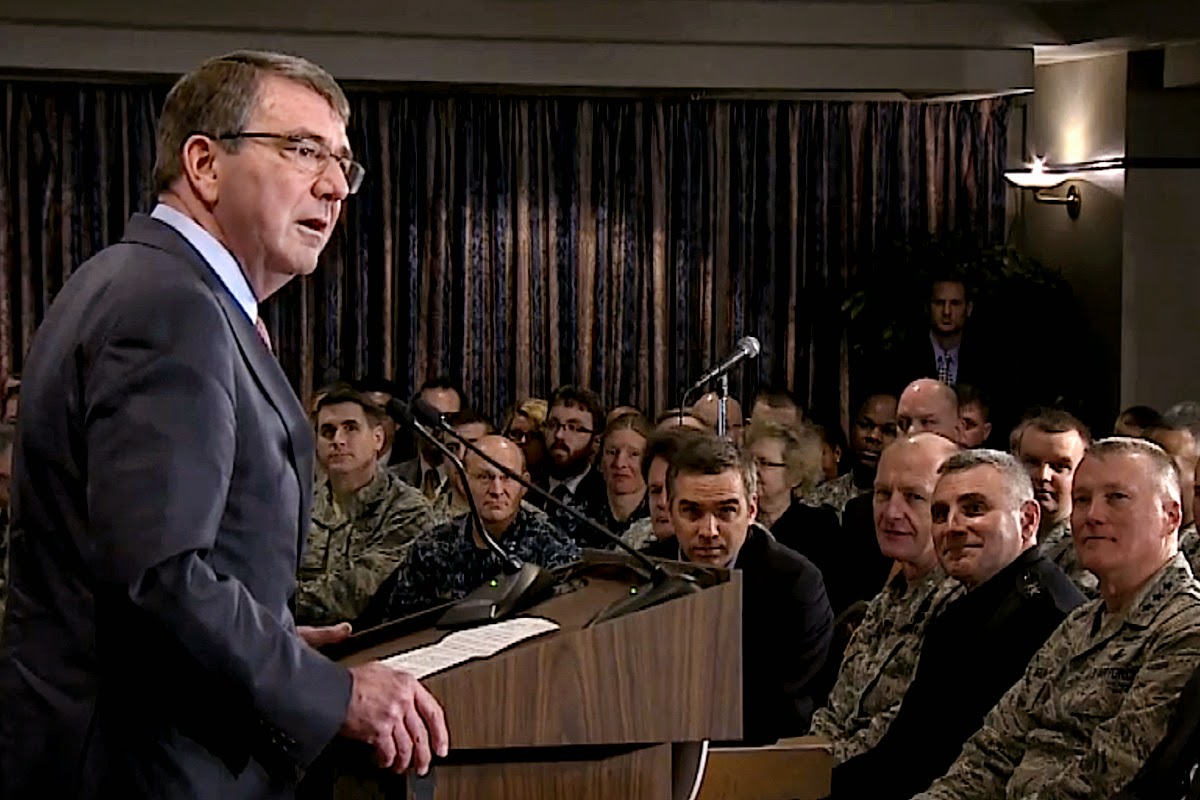 Claudette Roulo at the DoD News offers the below report:

The mission of Cybercom is vital to the economic and physical security of not just the nation, but to Americans in their individual lives, Carter said.

"With all that's going on in the world, from Iraq to Ukraine, to the Asia-Pacific, the domain that you protect -- cyberspace -- is presenting us with some of the most profound challenges, both from a security perspective and from an economic perspective," he told the troops.

National leaders at every level are "seized with the need to get on top of this problem," the defense secretary said.

The Defense Department must be open to sources of good people and new technology to better position itself to defend the nation in cyberspace, he said.

"And that means we need to build bridges to society. Bridges that aren't as necessary in other fields of warfare that don't have a civilian or a commercial counterpart to the extent that this field does," Carter said.

Transparency is a difficult goal in cyber defense, the secretary acknowledged, but added that the department must always be open to new ideas and people.

"We can't always tell them what we are doing," the defense secretary said, "but we need to be open enough with our government so that it knows what it's doing."

The department must also be open to the ideas of new generations, he said.

"We need people who grew up with technology that was not available when I was growing up, and therefore have a sixth sense about it which I can never have," Carter said.

The development of the cyber workforce can be a model for DoD, he told the troops.

"The freshness of approach, the constant effort to stay up [and] reinvent, that your field demands is actually something we can use everywhere in the department," the defense secretary said.

The cyber skill set and professional orientation doesn't have a good analog in the traditional armed services, Carter said.

"For the institutions that you join, be they military services or field agencies or new commands, they are trying to figure out how to welcome this new breed of warrior to their ranks," he said.

"We have to figure out how to get it to fit in, so that you all have a full opportunity to bring to bear on your careers the expertise that you gained here and that sense of mission that you felt here," the defense secretary said.

Challenges always accompany doing something new and exciting, Carter said, adding that he is determined to create a place where cyber warriors fit. "We'll find the path together," he said.

The relationship between Cybercom and the National Security Agency is also a work in progress, Carter said.

"My view is that we're doing the right thing in having the leadership of those two organizations in the same place," he said. "And one way of thinking about that is that we just don't have enough good people like you to spread around, and we need to cluster our hits."

Ensuring that cyber troops have the training, equipment and resources they need is a high priority for the department, he said.

"If you read about sequester, which is a terrible, stupid thing that we are doing to ourselves -- I have nothing good to say about it," Carter said, referring to the across-the board government spending cuts the Budget Control Act of 2011 is set to impose in October. "But I think that even in the era of sequester, we understand that this mission area is one we cannot afford not to keep investing in."

The cyber mission force represents American ideals in cyberspace, he said. Keeping cyberspace open and free for everyone is its central focus, the defense secretary said.

"We're going to execute our mission while being as transparent as possible, because that's also who we are," Carter said.

"And that's why I wanted my remarks to you to be public," he told the troops. "That's an unusual thing for you, and I know that some of you can't be seen on television because of the nature of your work. And [that] it's rare that media come into the premises of this organization, but I wanted not only you to know how important we know what you do is for the country, but everyone else to hear that as well."