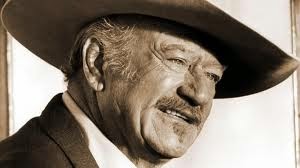 On June 3rd the American Film Institute (AFI) offered their top 50 heroes and 50 villains in cinema in a three-hour television special.

The character of Atticus Finch, the principled and idealistic lawyer in To Kill a Mockingbird," played by Gregory Peck, was voted the greatest hero in 100 years of American film history. The character of Dr. Hannibal "The Cannibal" Lecter, the brilliant and psychotic murderer, played in several films by Anthony Hopkins, was voted the greatest villain.

AFI is an organization dedicated to advancing and preserving the art of film, television and other forms of the moving image. AFI trains filmmakers, provides film preservation leadership and advances new digital technologies in movie making.

The AFI director and CEO, Jean Picker Firstenberg, said the 100 heroes and villains list may be one of the most thought provoking to date. The special follows five previous television installments on AFI’s centennial celebration of American film. The previous TV specials included AFI’s 100 Years–100 Movies, 100 Stars, 100 Laughs, 100 Thrills, and 100 Passions.

"We hope these top 50 heroes and villains lists will inspire movie lovers to acquaint and reacquaint themselves with these amazing and often complex characters in American film," Firstenberg said.

Last November, AFI sent out a ballot with 400 nominated screen characters to a jury of 1, 500 leaders from the creative film community, as well as to film critics and historians. The jurors were asked to choose 50 heroes and villains from an extensive list of characters from James Bond to The Wicked Witch of the West.

AFI’s criteria for a hero are he or she must be a mythic figure or an ordinary person who prevails in extreme circumstances. Heroes should dramatize a sense of morality, courage, and purpose, which AFI says is often lacking in our everyday world. AFI said that heroes should do what is good, just and right, and even though they may be ambiguous or flawed characters, they often sacrifice themselves to show humanity. AFI defines a hero as a single character, a duo or a team of characters.

AFI’s criteria for a villain are a man or woman who can be horrifically evil, not merely sleazy or grandiosely funny, but who are usually complex, moving and tragic. Their wickedness of mind, selfishness of character and will to power are sometimes masked by beauty and nobility. Like the heroes, the villains can be a single character, a duo or a team of characters.

Both heroes and villains should have made a mark on American society in matters of style and substance. The characters should elicit strong reactions across time, enriching America’s film heritage and inspiring artists and audiences today. The characters appeared in feature length films that are English language film with significant creative and/or financial productions elements from the United States.

I smell a fix with AFI’s choice of Atticus Finch as the number one hero. Peck, who recently died, was one of AFI’s founders and they presented him with a lifetime achievement award a few years back. Although Peck gave a fine performance, the character would not have been on my top 50 list.

But then best and worst lists, like artistic awards, are very subjective. I agree with George C. Scott’s view. Scott, upon refusing the Oscar for his great performance in Patton, said it was like lifting up two great paintings and pronouncing "and the winner is…"

But in the spirit of AFI, I submit here my personal list of my top three movie heroes and my top movie villains, which you may or may not agree with.

The Duke. AFI voted for characters rather than the actors who portrayed them, and John Wayne’s character Rooster Cogburn from True Grit came in at number 36, but John Wayne essentially played himself in nearly all of his great film roles. He mostly portrayed larger than life frontier lawmen and military men who fought for American justice and freedom. Although he never served a day in uniform and combat (he was also never a western frontier lawman), Wayne offered an original and unique American character that was much admired and emulated. He remains a hero today, many years after his death.

In Wayne’s last film, The Shootist, Wayne’s character, John Books, an old legendary gunfighter dying of cancer, offered his personal code to life by: "I won’t be wronged, I won’t be insulted, and I won’t be laid a hand on. I don’t do these things to other people, and I require the same from them."

Although Wayne was planning a final film, Beau John, Wayne, like Books, was dying of cancer and the cancer would take his life before he could begin filming. It seems fitting, however, that The Shootist would be his final film. The Duke, in my view, is the only clear choice for the number one American movie hero. 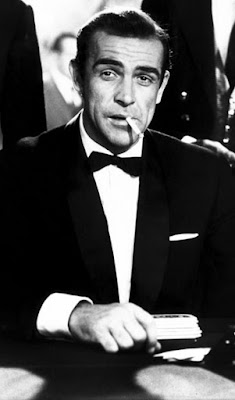 Bond, James Bond. Mr. Bond made AFI’s list, coming in at number three behind Atticus Finch and Indiana Jones, but he is number two on my list. The James Bond films feature a British character created by a British writer, Ian Fleming, but the films qualify as Americans produce the much imitated film series.

The early Sean Connery-James Bond films influenced America and the entire world. Coming on the scene in 1962’s Dr No, Connery’s Bond, the suave, deadly secret agent with the license to kill, was, and still is, the coolest character in the movies. 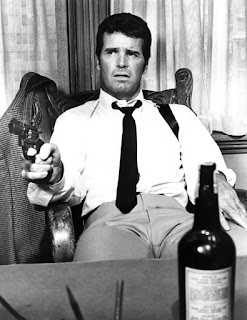 Philip Marlowe. Raymond Chandler’s wise cracking private detective made AFI’s list, coming in at number 32, but he is number three on my list. As portrayed by Humphrey Bogart in The Big Sleep, Marlowe was a modern white knight and an incorruptible tough guy. James Garner, Robert Montgomery and Robert Mitchum also portrayed Marlowe in later films. 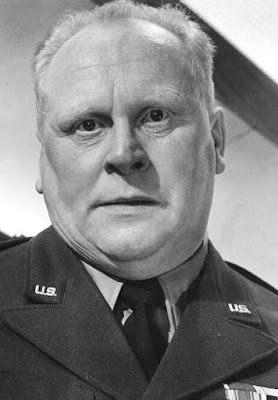 Auric Goldfinger: Goldfinger was the third James Bond thriller and appeared in 1964. Ian Fleming’s gold-loving megalomaniac villain, portrayed by German actor Gert Frobe, set the standard for all future Bond film villains as well as the villains in many other films. Goldfinger so loved gold that he painted women in gold paint for his pleasure as well as for his displeasure. Who can forget how he had Jill Masterson killed by covering her entire body in gold paint? As Bond explained to M later in London, it was all right to paint your body as long as you left a patch clear for your skin to breathe. Goldfinger didn’t.

At his stud farm in Kentucky, Goldfinger briefed a collection of American organized crime leaders on his bold plan to rob Fort Knox, the gold suppository of the United States. "Man has climbed Mount Everest, gone to the bottom of the ocean," Goldfinger told the gangsters. "He’s fired rockets at the moon, split the atom, achieved miracles in every field of human endeavor – except crime!"

Bond, who spied on the hoods’ congress briefing, corrected Goldfinger by saying that the nerve agent Delta 9 was fatal and not a sleeping agent as Goldfinger told the gangsters. "You’ll kill 60,000 people uselessly," Bond said. 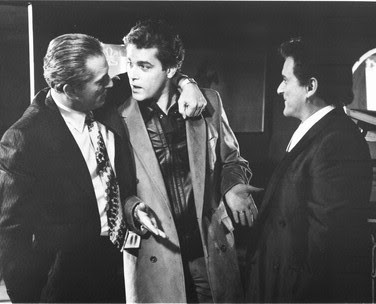 The Goodfellas. These criminals rank as my number two pick. "Jimmy the Gent" Conway and Tommy Devito, portrayed by Robert De Niro and Joe Pesci, were vicious gangland murderers in Martin Scorsese’s gritty and realistic Goodfellas.

The film, based on the book Wiseguy by Nicholas Pileggi, told the true story of Henry Hill, a thief and hustler who ran with a New York City gang of thieves and killers. The crew members include two psychopaths named Devito and Conway.
Conway was based on a very real criminal named James "Jimmy the Gent" Burke, who was the feared leader of the criminal crew. Devito was based on Thomas "Two-Gun Tommy" DeSimone.

The vicious beating and stomping of another mob member by Devito and Conway in Henry Hill’s bar is unforgettable.

Thinking that the gangster, a rival named "Billy Bats," is dead, the goodfellas stop off at Devito’s mother’s house to get a shovel to bury him. While the beaten, battered and still alive Bats lay in the trunk of Hill’s car, the trio enjoy a late night dinner with Devito’s mother. Later, when they discover that Bats is still alive, they viciously stab and shoot him to death as he lay in the trunk.

"Trunk Music," the gangsters call it.

The film, in my view, is the best crime film ever made. It explodes the myth of honor among thieves and the romantic notion of loyalty and kinship in Cosa Nostra. The film explodes the myth of the glamour of organized crime. What you see are a group of greedy, petty, violent, and not very bright criminals who easily turn on one another. The film is both funny and brutal, and it is an accurate portrayal of the real world of crime. 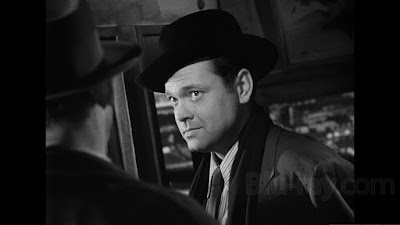 Harry Lime. Harry Lime is my pick for the number three film villain. Harry Lime, portrayed By Orson Welles in The Third Man, is a great evil character. Lime is a post-World War II black marketer who masterminds a plot to sell diluted penicillin to hospitals, which contributes to the death of many children.

Lime is unseen and only talked about for roughly half of the film and when he is finally introduced, we see only Lime’s face in the shadows, briefly lit in a dark alley in Vienna. Lime is seen quickly in profile, with a wry, smug and self-satisfied look on his face. He is, as one reviewer called him, "a charming monster."

"In Italy, for 30 years under the Borgias they had warfare, terror, murder and bloodshed, but they produced Michelangelo, Leonardo da Vinci and the Renaissance," Lime explained. "In Switzerland, they had brotherly love. They had 500 years of democracy and peace, and what did that produce? The cuckoo clock."

The Carol Reed film, which was written by the great thriller writer Graham Greene, is a classic. The film, made richer by the black and white film noir style and the Anton Karas zither music, is truly unforgettable.

Do you agree or disagree with my picks?

Note: The above column originally appeared in The Orchard Press Online Mystery Magazine in 2003.
Posted by Paul Davis at 1:03 AM