'How Inspector Rebus Saved My Sanity': Ian Rankin On How Edinburgh's Canniest Cop Reignited His Love For Writing 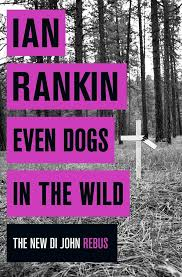 Graeme Thomson at the British newspaper the Daily Mail reports on the return of Ian Rankin's Scottish detective character.

Britain's most successful crime writer peers into his hot chocolate as though searching for clues.

'Something had got lost,' says Ian Rankin finally. 'I had to remind myself why I wanted to be a writer.' Meeting

Event in an Italian cafe in Edinburgh's New Town, the best-selling author, 54, talks unguardedly about the book he thought he might never write.

Having taken a year off to ponder weighty matters of life and death, Rankin has just completed the first draft of his next novel, Even Dogs In The Wild, the 20th to feature hard-drinking detective John Rebus.