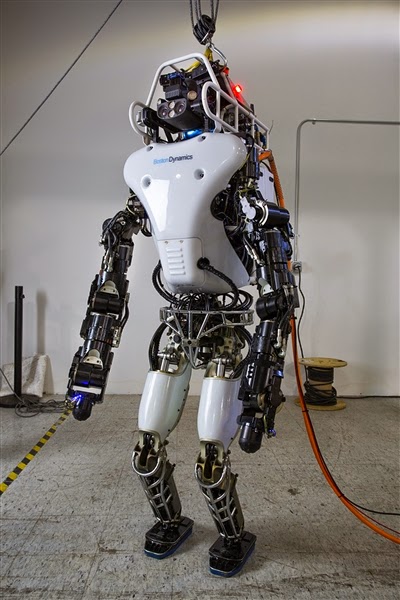 The DARPA Robotics Challenge, or DRC, is a program for robot systems and software teams seeking to develop robots that can help people respond to natural and other disasters.

"It's incredibly exciting for me personally and for DARPA as a whole to see the level of interest that we've gotten from around the world," Pratt, DARPA's DRC program manager, told reporters.

Participating teams -- from Germany, Hong Kong, Italy, Japan, China, South Korea and the United States -- represent some of the most advanced robotics research and development organizations in the world, the DARPA DRC website says.

The teams are collaborating and innovating on a short timeline to develop hardware, software, sensors and human-machine control interfaces that will allow them and their robots to complete a series of tasks that DARPA has chosen for their relevance to disaster response.

The international contest is the culmination of a program that began in June 2013 with a competition for robotic software teams held in a virtual environment. This first challenge tested software teams' ability to guide a simulated robot through three sample tasks.

In the later trials and in the finals, some teams will provide their own robots and write software, and others will write software only and use it in the Atlas robots.

During the following challenge - the DRC Trials held in December 2013 at the Homestead-Miami Speedway in Florida -- 16 teams guided their robots through eight individual tasks that tested mobility, manipulation, dexterity, perception and operator-control mechanisms.

In the final challenge, to be held in June at Southern California's Fairplex in Pomona, 25 robots will be given an hour to perform a circuit of physical tasks to be completed one after the other in a simulated disaster zone, with degraded communications between the robots and their operators.

"The robots must somehow communicate information about the world they see in the simulated disaster zone to the human being despite interruptions in communication," Pratt said.

"And the human beings must give commands to the robots to execute at a sufficiently high level that they don't need to micromanage, or tele-op as it's called, each one of the motions that the robots do," he added. "And ... that has to happen despite a large number of dropouts in communication."

The tasks will be similar to those in the Homestead-Miami trials, but they will be "woven together into a fairly evocative and I think authentic type of story," Pratt explained.

Inside a safe zone, a team will put its robot in a vehicle, he said.

Then, with communications going back and forth to and from the team and the robot, Pratt said, the robot must drive the vehicle into a simulated disaster zone and on its own get out of the vehicle.

The robot then will have to go through a door to get into a building where it will face a series of obstacles, he added.

The obstacles will include debris and rough terrain, and the robot will have to do manipulation tasks, like moving a valve and hooking up wires, Pratt said. The robot also will have to use a tool to cut a hole through a wall and, after all the tasks are complete, climb up a set of stairs to get out of the building.

"We're going to throw in one more thing," Pratt said, "a surprise task that we're not telling the teams [about], and for the first time we're going to test whether the teams can adapt themselves to a task that they had not seen before."

The teams also have other limitations. They have an hour to complete all the tasks and the robot has to carry its own power supply, Pratt said. Communications will be wireless and will be purposely degraded. And the teams won't be able to use safety cords that keep the robots from falling down.

To score the human-robot teams, officials will count the number of teams with the most successful tasks and these will be tied, then their times for completing all the tasks will be counted, and those who perform the tasks in the least amount of time will receive prizes, Pratt said.

The winning team will receive a $2 million grand prize, and DARPA plans to award $1 million to the runner-up and $500,000 to the third-place team.

"We are trying to make the world a little bit more robust to disasters that are caused by nature or by [people], and in particular DARPA's job is to make investments in early technology," Pratt said.

Transforming the Field of Robotics

The program's goal is to "make robots and humans beings able to work together in ways where each one is doing what they do best. Robots are good at working in very dangerous environments. Human beings are good at making very difficult judgment calls and using their cognition," he added.

DARPA says that technologies resulting from the DRC will "transform the field of robotics and catapult forward development of robots featuring task-level autonomy that can operate in the hazardous, degraded conditions common in disaster zones."

Pratt held the media call from South Carolina at a test site where most of the teams have come, he said, and each will bring their robots and computers and wireless communication gear to the test bed and get two days "to work out all the various kinks on their side, and we're also testing the equipment that we're going to use at the finals."

A Spectrum of Capability

Pratt and his team have seen five of the 25 teams so far, but he said some of the teams are doing extraordinarily well and seem to have a handle on doing all the tasks. Other teams aren't doing so well, Pratt said, and he thinks there will be a spectrum of capability during the finals.

Pratt said that as he has visited teams around the world, he's seen some of the teams using their own test sites to show how they can handle each task.

"What remains to be determined is how well the robots recover from falls," he said. "If I were to give advice to the teams, I would say fall down now and get up now and let's see how that works. And don't be afraid to break your robot if it falls, because that's almost certain to happen during the challenge."

Note: The above photo shows the Defense Advanced Research Projects Agency's Robotics Challenge teams using DARPA's Atlas robot, developed by Boston Dynamics, met in Waltham, Mass., in January to learn about upgrades to the robot. It was redesigned with the goal of improving power efficiency to better support battery operation. About 75 percent of the robot was rebuilt. Only the lower legs and feet were carried over from the original design. Lighter materials allowed for inclusion of a battery and a new pump system with only a modest increase in overall weight. The upgraded robot is 6-foot-2 inches tall and weighs 345 pounds. DARPA image courtesy of Worcester Polytechnic Institute.
Posted by Paul Davis at 2:05 AM