'Human Shield' Three-Year-Old Was Shot Dead In Southern Italy Alongside His Mafia Boss Grandfather Who Took The Boy With Him Everywhere To Prevent Assassinations It Is Revealed, As Police Arrest Two Men 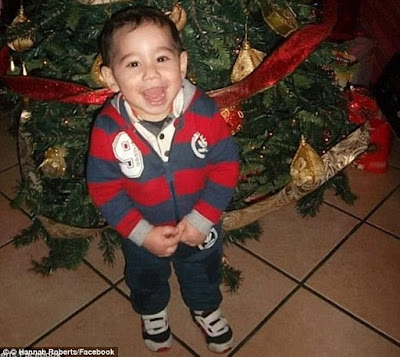 Thomas Burrows at the Daily Mail offers a piece on the poor young child was killed in Italy with his organized crime grandfather.


Police in Italy have arrested two people on suspicion of murdering three-year-old Nicola 'Coco' Campolongo in the killing that sent shockwaves through the country.

The toddler, who was being used as a human shield by his grandfather, was shot in the head in the town of Cassano allo Ionio.

He was murdered along with his grandfather and his grandfather's Moroccan girlfriend in an apparent mafia assassination linked to drug-dealing territory.

Coco's body was found strapped in a car seat in a burnt out Fiat Punto in January 2014 in a case that stunned Italy.

Today Cosimo Donato, nicknamed 'Mouse', and Faustino Campilongo, known as 'Potbelly' were arrested.
They murdered Coco because he recognised them, police said.

His grandfather, Giuseppe Iannicelli, had been trying to expand his business in Cosenza - a territory controlled by the powerful 'Ndrangheta mafia - and had started taking his grandson with him on drug runs to try and stave off reprisals.

The two alleged attackers lured Iannicelli to a meeting purportedly to pay for a batch of drugs, then killed all three.
On the roof of the torched car was a single unmarked 50 cent coin, an apparent symbol from the assassins that Iannicelli had not paid his debt.