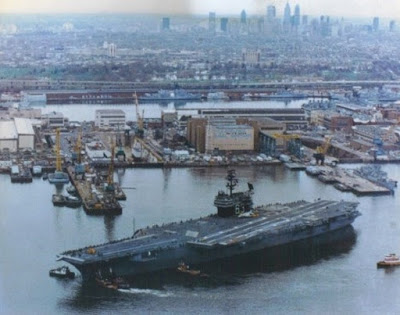 The U.S. Navy offers a video that looks back at 240 years of the American naval service.

240 years ago, a group of rebels, calling themselves the Continental Congress, did the unthinkable. They approved the formation of a navy. A navy that in less than five years would help topple the mightiest empire the world had ever seen.

Note: The above photo is of the aircraft carrier USS Kitty Hawk pulling out of the Philadelphia Navy Yard in 1987 after a major overhaul. I served on the Kitty Hawk during the Vietnam War in 1970-1971.

You can click on the above photo to enlarge.
Posted by Paul Davis at 6:58 PM