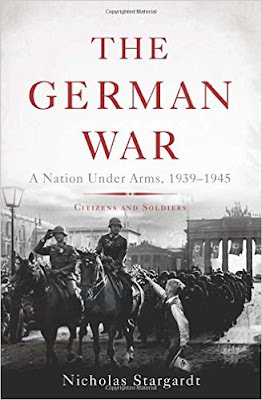 Veteran journalist and author Joseph C. Goulden offers a good review of Nicholas Stargardt's The German War: a Nation Under Arms, 1939-1945 for the Washington Times.

Given German barbarity, I shan’t feign concern for the discomforts suffered by the country’s citizens during World War II, whose active participation and support kept the horrendous conflict alive to the bitter end. Even the supposedly fanatical Japanese did not fight to the gates of the Imperial Palace in Tokyo as the Germans fought for the Reich Chancellery in Berlin.
Nicholas Stargardt, a British historian, records that Hitler’s minister of armaments, Fritz Todt, conceded on Nov. 29, 1941, that “this war can no longer be won by military means.” Yet Hitler and the German military persisted in fighting for three and a half more years. Hitler was bolstered by “overwhelming public support” — even when each day of fighting “cost the lives of 10,000 German soldiers.”
The current “victim narrative” pushed by many Germans equates the firebombing of Dresden and other cities with the murder of the Jews. (For whatever perverted reasons, many “historians” in the West, both in the United States and Britain, swallow this odious thesis without a token look at reality.)
Based on a painstaking study of diaries and letters from frontline soldiers, which spoke candidly of mass murders in Poland and elsewhere,Mr. Stargardt flatly refutes the “good German/bad German” distinction claimed in the postwar period and beyond. The general populace was aware early on what was happening in the death camps and elsewhere. Yet the majority of Germans continued blind support of Hitler and his regime.
Be forewarned that Mr. Stargardt’s book is sickening reading. As a German report stated, “Women on the train [to work camps] gave birth to children who were tossed from the open window.” More than 40 offenses warranted the death sentence — for instance, telling jokes “that undermined the morale of the armed forces,” listening to foreign radio, or refusing to work on Sundays. But the regime was careful to steer clear of the “social majority,” concentrating the most draconian measures against such “undesirables” as Jews, communists and homosexuals.
You can read the rest of the review via the below link: