The End Of Tsarist Russia: The March To World War I & Revolution 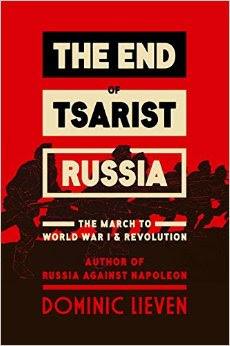 Veteran journalist and author Joseph C. Goulden offers a good review of Dominic Lieven's The Of Tsarist Russia: The March To World War I & Revolution in today's Washington Times.


In the freshest of books marking the centennial of World War I, Dominic Lieven offers an explanation for the conflict that most western-oriented historians have ignored: “The war was first and foremost an eastern European conflict.”
As is well-recorded, the precipitant event for the war was the murder of the Austrian heir Franz Ferdinand in June 1914. Two weeks of diplomatic to-and-fro led to a war involving all European powers. Mr. Lieven, a British historian of Russian heritage, convincingly argues that at its core, the war was a confrontation between Russia and Austria, eastern Europe’s two greatest empires.
As he writes, France and Britain were drawn into what started as a conflict in eastern Europe above all because of fears for their own security: The victory of the Austro-German alliance over Russia would tilt the European balance of power toward Berlin and Vienna.
And, although victory was finally won by Britain and France on the western front, “the peace of 1918 was mostly lost in East Europe. The great irony of World War I was that a conflict which began more than anything else as a struggle between the Germanic powers and Russia to dominate east-central Europe ended in the defeat of both sides.”
You can read the rest of the review via the below link: