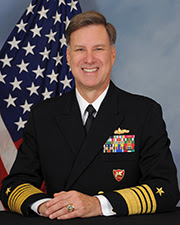 WASHINGTON October 6, 2015 — In the same vein as Winston Churchill’s Iron Curtain metaphor, a NATO commander said today that Russia is building an “arc of steel” from the Arctic to the Mediterranean Sea.

The alliance also faces threats from the south, and both threats argue for more attention from the United States, NATO members and allied states, Ferguson said.

The admiral spoke first about Russia. Calling it the most dangerous threat in Europe, he said Russian leaders are more than willing to use military force to achieve their objectives, noting Russian aggression in Georgia, its illegal annexation of Crimea and its continued operations in Ukraine.

NATO’s response to Russia was “assurance and adaptation,” he said.

Assurance was covered by demonstrations of alliance solidarity on land, in the air and at sea. “These actions were highlighted in the media with the intent of improving their visibility in the public domain,” he said. “The intended effects were to reassure allies and improve the underlying support structures of the Eastern nations. There was a renewed focus on interoperability, logistics and intelligence.”

The Hard Work of Adaptation

The hard work underway now is adaptation, which, Ferguson said involves the fundamental transformation of NATO’s structure and capabilities. “To be credible, NATO’s adaptation must focus on building the range of capability, increase its capacity or depth and improve its responsiveness,” he said.

Russia has learned this already, the admiral said, noting that its actions fully integrated the elements of speed and strategic surprise in its operations. “Air and land forces with cyber will dominate the center of NATO’s defended territory,” Ferguson said.

But Russia is active on the waves, too, Ferguson said. From the North Atlantic to the Black Sea, Russia is fielding an increasingly capable navy, he added, unveiling a new maritime strategy and demonstrating new equipment and capabilities at sea.

“This remilitarization of Russian security policy is evident by the construction of an ‘arc of steel’ from the Arctic to the Mediterranean,” Ferguson said. “Russia has introduced advanced air defense, cruise missiles systems and new platforms.”

The strategy is clearly aimed at deterring NATO maritime forces, he said, and is not defensive. “The proficiency and operational tempo of the Russian submarine force is increasing,” Ferguson said.
Russia also is integrating asymmetric capabilities fully into its conventional military strategy. “This involves the use of space, cyber, information warfare and hybrid warfare designed to cripple the decision-making cycle of the alliance,” Ferguson said. “Their capabilities are focused on the creation of ambiguity.”

The alliance must reply, he said. He recommended three areas of response. First, alliance nations must invest in training at the high-end of warfighting skills. “Second, forces must be on call for real world operations, and third we must keep apace of the growing Russian capabilities,” he said.

Any training has to incorporate Russian new strategy, Ferguson said, adding that naval forces must be able to reply to and counterattack asymmetric threats. “We must invest in systems that allow us to fight through these effects,” the admiral said.

The security challenges to the alliance’s south also concern NATO planners, he said. Al-Qaida affiliates and extremist groups in Africa are becoming increasingly dangerous, and the Islamic State of Iraq and the Levant controls 200 kilometers of Libya’s coast, he noted. “What makes this threat particularly vulnerable is no state structure exists for negotiation, as it does with Russia,” he said.

The immediate challenge for NATO military commands is to improve the alliance’s understanding of the networks and to begin to provide political leaders with better situational awareness and, consequently, well-reasoned options for action, Ferguson said.
Posted by Paul Davis at 6:13 PM