How James Bond Made The Submariner Rolex's Coolest, Most Recognized Watch 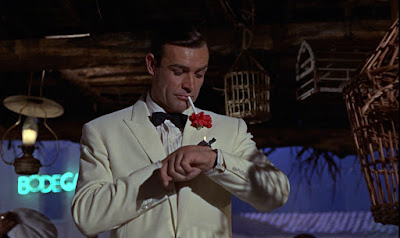 My most prized possession is my Rolex Submariner watch.

I was a teenager when I first saw the Rolex Submariner on Sean Connery's wrist in Dr No, the first James Bond film based on Ian Fleming's classic thrillers. I dreamed of owning my own Rolex Submariner.

Later, in an iconic scene in the beginning of Goldfinger, Bond glances at the famous watch in a Mexican cafe as he waits for the charges he planted to explode (see above and below photos). 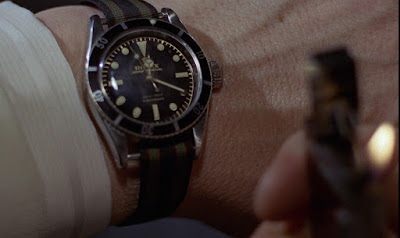 I finally received my own Rolex Submariner in 1982 when a beautiful young woman bought me one for my birthday. I married her a month later. I wear the Rolex proudly today.

Robert Klara at Adweek.com offers a piece on the famous watch.

The Rolex Submariner has taken on an interesting life," said writer, author and luxury brand consultant Ariel Adams. "Because it's not just a steel dive watch, it's a Rolex steel dive watch, and everyone from politicians to actors to soldiers wear it."

Here's how that happened. In 1953, French Navy diver Jacques Cousteau wrote The Silent World, a book that chronicled his undersea explorations. The book, and the Academy Award-winning documentary film that followed, captured the world's imagination and created a generation of recreational divers. Rolex responded with the Submariner.

The wristwatch might never have left the lockers of naval cadets were it not for the Bond franchise. The first four films all featured a Submariner on the wrist of our hero.

http://www.adweek.com/news/advertising-branding/how-james-bond-made-submariner-rolex-s-coolest-most-recognized-watch-167595
Posted by Paul Davis at 10:14 AM