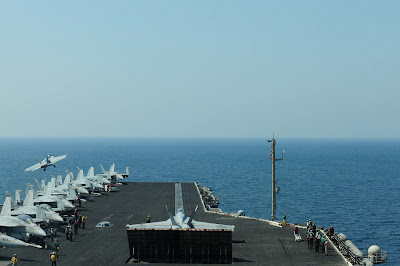 WASHINGTON October 21, 2015 — Since operations began against Islamic State of Iraq and the Levant targets in Syria and Iraq, the coalition has conducted 7,603 airstrikes, an Operation Inherent Resolve spokesman in Baghdad told Pentagon reporters today via video teleconference.

Army Col. Steve Warren said 4,933 of the strikes have taken place in Iraq, and 2,670 have been conducted in Syria.

In Iraq, Iraqi forces have regained most of the Beiji oil refinery and are clearing small pockets of enemy resistance, Warren said, noting that coalition forces have conducted four airstrikes in Beiji over the last week. The Iraqi air force has been flying in direct support of ground forces at Beiji, flying more than 40 missions over the last three days, he added.

“The ability of the Iraqi air force to fly close air support missions and support their own ground forces marks a key milestone … in capability that we are helping the Iraqi security forces develop,” Warren said.

In Ramadi, Iraq is consolidating and reorganizing its security forces in preparation for continued offensive operations, he added, and Iraqi forces on the northern, southern and western axes are clearing improvised explosive devices in populated areas.

“Aided by coalition airstrikes, Iraqi security forces fought off these attacks, and in the process destroyed a command-and-control node, struck a [vehicle bomb] before the enemy was able to use it, and killed several enemy [fighters],” Warren said.

In northern Syria, the coalition conducted 15 airstrikes over the past eight days, focused mainly in Raqqa, Manjeb and Aleppo, the colonel said.

“Yesterday … we signed a memorandum of understanding with Russia regarding measures to minimize the risk of in-flight incidents” Warren added, in the airspace over Syria. The memorandum includes only safety protocols for aircrews he said. “We continue to believe that Russia's strategy in Syria is counterproductive and will exacerbate the instability there,” he added.

Warren said the coalition assesses that the Russians have conducted about 140 airstrikes clustered around Hama, Homs and Latakia.

“According to open-source reports, these strikes have displaced about 7,000 households, or 35,000 people,” he said.” [Most] of these people are believed to be moving to areas where humanitarian support is already strained due to overwhelming numbers.”

Civilian leaders from around the globe have called on Russia to cease its attacks and seek a political solution to the Syrian civil war, Warren said.

Focusing on broader aspects of coalition air operations, Warren discussed airstrikes against ISIL munitions factories and the balance of activity on the battlefield.

Along with strikes against high-value targets, tactical operations in support of troops, and dynamic strikes when the coalition sees ISIL conducting operations, he said, “we’ve also got deliberate strikes targeting their infrastructure.”

During the last 45 days, the coalition has struck and destroyed 47 IED and vehicle-bomb factories and has struck 30 oil infrastructure targets, Warren said.

Enemy use of suicide vests and vehicle bombs is down 49 percent from a 12-week average, he added, and IED incidents are down 32 percent.

“The intent with the IED factory and oil targets is to pressure the funding and functioning of the ISIL war machine [by] getting at their industrial base,” Warren said.

Warren also explained that the battlefield is more than individual fights.

“We've placed increased pressure on Beiji -- almost completed the Beiji operations … and continued pressure on Ramadi. Then we have pressure over in Syria from our Syrian-Arab coalition partners,” he said.

Such pressure on multiple points across the battlefield makes it necessary for the enemy to react and to move, Warren added.

“Because of the pressure we're placing in Ramadi and Beiji and Syria -- all that pressure is causing our enemy to have to move. And one of the places that we're seeing them move to is Sinjar,” he said, responding to a question about recent heavy airstrikes there.


“And as always,” Warren added, “when we see our enemy, we will kill them.”

Note: In the above U.S. Navy photo by Petty Officer 3rd Class Stephane Belcher an F/A-18F Super Hornet, attached to the Red Rippers of Strike Fighter Squadron 11, prepares to launch off the flight deck aboard the aircraft carrier USS Theodore Roosevelt, Sept. 14, 2015. Theodore Roosevelt is deployed in the U.S. 5th Fleet area of operations supporting Operation Inherent Resolve strike operations in Iraq and Syria as directed while conducting maritime security operations and theater security cooperation efforts in the region.

You can click on the above photo to enlarge.
Posted by Paul Davis at 1:06 AM