The Power Of America's Aircraft Carriers 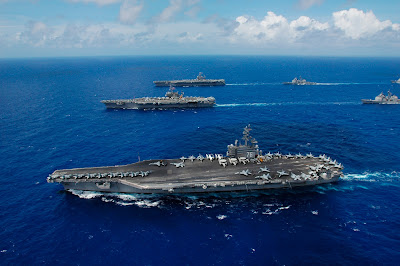 I've heard critics dimiss the modern aircraft carrier all of my life, and yet all of my life I've seen American presidents ask the same question during times of crisis - "Where are the carriers?"

George F. Will is the latest person to claim the era of the carrier is over (although he did not serve in the Navy and has no special knowledge of naval warfare that I'm aware of) in his column in the Washington Post - https://www.washingtonpost.com/opinions/our-navy-our-destiny/2015/09/30/9505d966-66cd-11e5-9ef3-fde182507eac_story.html

I served as a teenage sailor on the aircraft carrier USS Kitty Hawk in 1970-1971 during the Vietnam War and as a writer I've covered a good number of stories involving aircraft carriers in later wars and conflicts. I'm a strong supporter of supercarriers.

A couple hundred online readers took Will to task over his column and I thought Edward J. Marolda offered a very good respond to Will's column in a letter to the Post.

In his Oct. 1 op-ed column, “Our Navy, our destiny,” George F. Will gave space to the argument that the aircraft carrier is dead. Reports of this death, however, to paraphrase Mark Twain, are greatly exaggerated.

... Periodic calls for a larger, less expensive fleet of small ships, such as the “high-low mix” debate of the 1970s, have always come up short when considered against the versatility, survivability and centralized combat power of the aircraft carrier. Indeed, if the leaders in Beijing now consider these ships vulnerable, why are they refurbishing an old Russian ship and reportedly building their own aircraft carrier?

You can read the rest of the letter via the below link:

You can click on the above photo to enlarge.
Posted by Paul Davis at 2:18 AM