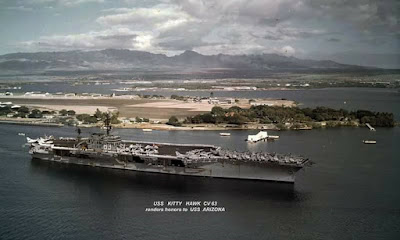 The Imperial Japanese attacked Pearl Harbor on this day in 1941.

You can read about the attack via the below link:

Back in 1970 I was a teenage seaman stationed aboard the USS Kitty Hawk as the aircraft carrier headed towards "Yankee Station,"  off the coast of Vietnam. On the way, we made a port-of-call to Pearl Harbor in Hawaii and sailed by the USS Arizona Memorial.

As you can see from the above U.S. Navy photo, all hands "manned the rails," an honor tradition that had us on deck in our dress white uniforms as we passed the memorial, which floats above the sunken battleship that went down during the Japanese sneak attack.

I have a enlarged framed copy of this photo hanging in my basement office and library.

You can also read a detailed account of the Japanese attack on Pearl Harbor via the below link: 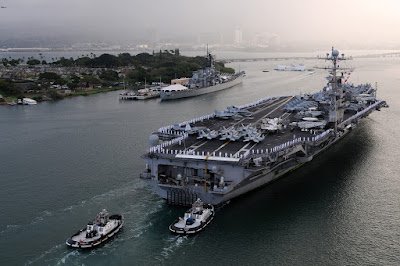 Note: In the above U.S. Navy photo, the aircraft carrier USS Abraham Lincoln, manning the rails, is shown entering Pearl Harbor for a visit in 2011.
Posted by Paul Davis at 2:10 PM