The Spy Who Couldn't Spell: A Dyslexic Traitor, An Unbreakable Code, And the FBI's Hunt For America's Stolen Secrets 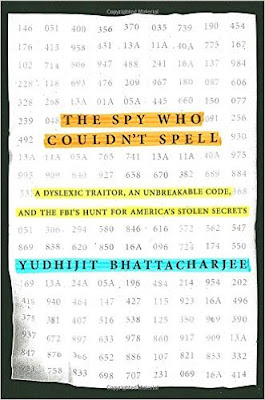 Howard Schneider offers a review of Yudhijit Bhattacharjee's The Spy Who Couldn't Spell for the Wall Street Journal.


In December 2000 Steven Carr, a special agent in the FBI’s counterintelligence unit in Washington, D.C., received a parcel from the bureau’s New York City office. It contained stolen American military secrets that had been passed on to the New York FBI by an informant in the Libyan consulate. The secrets had been mailed to the consulate along with encrypted cover letters from an individual who, the bureau would conclude, clearly worked in an American intelligence organization. The letter-writer offered to supply Libya with more secrets in exchange for money. Carr was assigned the job of finding the anonymous renegade. Yudhijit Bhattacharjee’s “The Spy Who Couldn’t Spell: A Dyslexic Traitor, an Unbreakable Code, and the FBI’s Hunt for America’s Stolen Secrets” is an excellent, highly engrossing account of the search for a man who was cunning, avaricious—and a dreadful speller.
The FBI’s target turned out to be Brian Patrick Regan, a most improbable traitor: He was a former Air Force master sergeant whose last assignment before retiring from the military was at the National Reconnaissance Office, a secretive agency “responsible for managing the nation’s spy satellites.” Regan was born in 1962 and raised on Long Island by strict Irish Catholic parents. His life was troubled from an early age because he was dyslexic. His behavior and speech were peculiar, and even his “friends” mocked and harassed him. But he had a gift for “spatial intelligence” and a “knack for stealth” (as a teenager he burglarized a neighbor’s house). He also cultivated a desire to overcome his problems and make something of himself. When he was a high-school senior, he cheated on a military aptitude test and scored high enough to allow him to enlist in the Air Force. After basic training he was assigned to study signals intelligence and analysis, and notwithstanding his past shoddy schoolwork, he succeeded, working harder than he ever had to master his lessons. As an intelligence analyst, Mr. Bhattacharjee writes, he discovered that his disability was actually an advantage: Dyslexics’ “global view helps them make connections between disparate pieces of information and recognize patterns in data that might elude more linear thinkers.”
You can read the rest of the review via the below link: