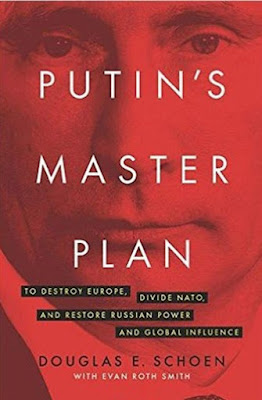 
A day or so after Soviet Communism collapsed into a pile of rubble, I had a phone chat with a longtime pal, Herbert Romerstein, who knew — and hated — Communism with a fervor unsurpassed in Washington (or perhaps anywhere else).
As dedicated Red-baiters, we gloated a few minutes, then Mr. Romerstein quietly opined, “Before we shall cheer .”
I knew what he was thinking. Could a society constructed by a power-mad dictatorship undergo a permanent reformation? Or, in due course, could we expect more of the same from whoever ended up running Moscow?
The answer, via the book at hand, is one of the more frightening works I have read in years. It convincingly documents how Russian President Vladimir Putin is well into a planned power grab that extends far beyond his stated goal of “restoring Russia as a player on the world stage.”
You can read the rest of the review via the below link:

http://www.washingtontimes.com/news/2016/nov/29/book-review-putins-master-plan-to-destroy-europe-d/
Posted by Paul Davis at 11:33 AM