Trump Can End The War On Cops 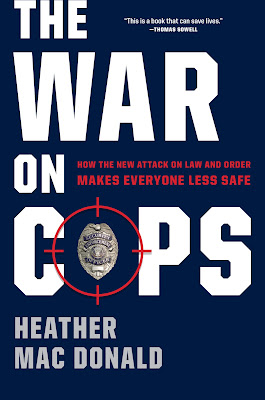 Heather Mac Donald, author of The War On Cops: How the New Attack On Law and Order Makes Everyone Less Safe, offers a piece in the Wall Street Journal on how Trump can end the war on cops.


Donald Trump’s promise to restore law and order to America’s cities was one of the most powerful themes of his presidential campaign. His capacity to deliver will depend on changing destructive presidential rhetoric about law enforcement and replacing the federal policies that flowed from that rhetoric.
The rising violence in many urban areas is driven by what candidate Trump called a “false narrative” about policing. This narrative holds that law enforcement is pervaded by racism, and that we are experiencing an epidemic of racially biased police shootings of black men.
Multiple studies have shown that those claims are untrue. If there is a bias in police shootings, it works in favor of blacks and against whites. Yet President Obama has repeatedly accused the police and criminal-justice system of discrimination, lethal and otherwise. During the memorial service for five Dallas police officers gunned down in July by an assassin who reportedly was inspired by Black Lives Matter, Mr. Obama announced that black parents were right to “fear that something terrible may happen when their child walks out the door”—that the child will be fatally shot by a cop.
You can read the rest of the piece via the below link:

Note: I read Heather Mac Donald's excellent book and I plan on interviewing her after the New Year holiday. You can read the Q&A with her on this site.
Posted by Paul Davis at 8:02 PM