‘The Man With The Poison Gun: A Cold War Spy Story’ 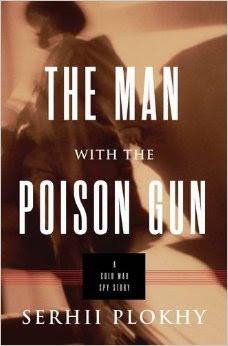 Veteran journalist and author Joseph C. Goulden offers a good review in the Washington Times of Serhii Plokhy's The Man With the Poison Gun.


One of the longest-running bully-boy relationships in Europe is that of Russia and an oft-victimized Ukraine. Portions of Ukraine previously controlled by Poland were seized by the USSR as a spoil-of-war under the Hitler-Stalin Pact of 1939, and retained in the post-war period.
But proud Ukrainian nationalists resisted Soviet rule, led by a fierce (if divided) resistance. The Soviets responded with massive troop deployments that killed an estimated 100,000 “bandits” from 1944-46. The leader of the Organization of Ukrainian Nationalists, Stepan Bandera, was driven into refuge in Munich, Germany, where he called for an independent state. In a show of strength, he also arranged the assassination of Yaroslav Halan, a pro-Soviet Ukrainian.
An outraged Joseph Stalin ordered retaliation. His chosen instrument to direct revenge was underling Nikita Khrushchev, then the party boss in Ukraine.
Thus began the transformation of Bogdan Stashinsky, a 19-year-old resident of a small village near Lviv, into one of the KGB’s deadliest assassins. His story is told in a gripping work by Serhii Plokhy that is rich in the tradecraft with which Stalin’s killers stalked opponents — as a matter of state policy. Mr. Plokhy, a professor of Ukrainian history at Harvard, has written extensively on the country.
Stashinsky fell into hands of a predecessor of the KGB through accident. Detained for avoiding a small train fare, he was given a choice: jail for him and family members, or the secret police. He was ordered to penetrate a resistance group and finger the man who killed Halan. He succeeded, but came under local suspicion as an informer. He was pulled out for extensive tradecraft training and routine spy assignments in West Germany.
Then came a quantum jump: Stashinsky was tasked with murdering Lev Rebet, a Bandera rival In exile politics. He was introduced to a sophisticated new weapon: “a metal cylinder, eight inches long and less than an inch in diameter.” The cylinder contained an ampoule with liquid. When the trigger was pressed, a striker set off by a gunpowder charge hit the ampoule with poison, spraying the face of the target. The poison caused immediate unconsciousness and swift death; it would evaporate without a trace.
You can read the rest of the review via the below link:
http://www.washingtontimes.com/news/2016/dec/28/book-review-the-man-with-the-poison-gun-a-cold-war/
Posted by Paul Davis at 5:01 AM