Tricky Dick: Nixon Knew Castro Was A Communist From The Beginning 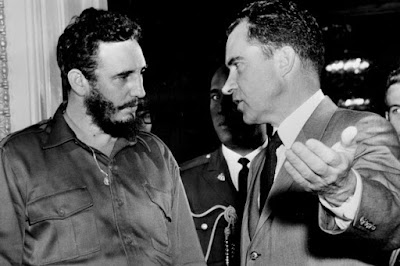 Carl Campanile at the New York Post offers a piece on Fidel Castro wondering how Richard Nixon knew he was a communist all along. (And so much for the false idea that bad America pushed Castro towards the Soviet Union and communism).


Fidel Castro charmed and fooled many during his lifetime. But he admitted he couldn’t trick Richard Nixon.
Nixon’s son-in-law Ed Cox visited Cuba in May 1987 with a group of European business executives, and El Comandante — who died Friday at the age of 90— agreed to a mano-a-mano chat with Cox.
Cox pulled out his old notes for the first time and revealed to The Post what he and Castro discussed during a wide-ranging four-hour meeting that ran into the wee hours.
“How did [Nixon] know I was a communist?” queried Castro. “My father-in-law was a very perceptive person,” Cox diplomatically told the dictator.
You can read the rest of the piece via the below link: