Marine General Joe Dunford, The Chairman Of The Joint Chiefs Of Staff, USO Troupe Arrive in Baghdad for Holiday with Troops 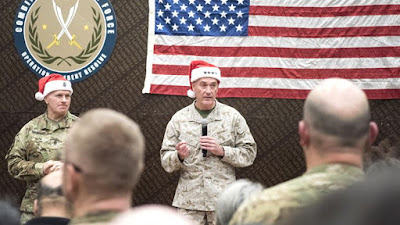 
BAGHDAD, Dec. 24, 2016 — Marine Corps Gen. Joe Dunford, the chairman of the Joint Chiefs of Staff, arrived here today and brought a USO troupe to provide a taste of home during the holidays to deployed U.S. service members.
The troupe includes country music stars Kellie Pickler and her husband, Kyle Jacobs; chef Robert Irvine and his wife, wrestling superstar Gail Kim; and the Roastmaster General, comedian Jeff Ross.
For Pickler and Jacobs, this is their 11th USO trip, and the other members also are USO veterans.
Second USO Trip This Month
This is the second USO trip Dunford and his senior enlisted advisor, Army Command Sgt. Maj. John Troxell, have led this month, and it is the first chairman’s USO trip that arrives for the holidays.
“I thought it was important to be out there on the holiday itself,” the general said in a short interview prior to arriving. “All of the USO shows have great people, and we appreciate them going out, but for the folks that came out this time, they gave up their family time over the holidays. For them to do this is really special.”
Roughly 4,800 U.S. troops are in Iraq supporting Iraqi security forces as they take on the Islamic State of Iraq and the Levant. Over the past year, Iraqi forces – which include Kurdish peshmerga – have had notable successes, including the liberation of Beiji, Fallujah and Ramadi. In Syria, indigenous forces are driving on ISIL’s so-called capital of Raqqa.
And now the battle is on in Mosul, Iraq’s second-largest city. U.S. forces, working with coalition allies, provide support, air power and advice to Iraqi formations, and the effort is succeeding, Dunford said.

Marine Corps Gen. Joe Dunford, chairman of the Joint Chiefs of Staff, country music artist Kellie Pickler, and Pickler’s husband, country music songwriter Kyle Jacobs, speak between television and radio interviews at the National Press Club in Washington about their USO Tour to the Middle East to visit troops for the holidays, Dec. 23, 2016. DoD photo by Army Sgt. James K. McCann
Saying Thanks
The USO troupe is a way to say thanks to the service members and show them Americans remember and appreciate their sacrifices, the chairman said.
“During the holidays, everyone wants to be with their families,” Dunford said. “But there are families of blood – moms, dads, wives, husbands, kids – and there is the family that grows in units.
“If you are in a unit, that’s your family, too,” he continued. “If you can’t be with your blood family, the next best group of people to be with is your unit. It’s your family away from home.”
USO CEO and President J.D. Crouch II also is accompanying the troupe. He said he had no trouble getting performers for the holiday tour. “Kellie and Kyle immediately said yes,” he said. “They were on board from the start. Jeff, Robert and Gail also cleared their schedules in record time to be a part of this.”
Important Trip
Troxell said the troupe coming during the holidays is incredibly important, because service members are in tough places, superbly doing what needs to be done to further the campaign plan against ISIL.

A 1st Infantry Division soldier sings "Tough" with Kellie Pickler during a Dec. 24, 2016, Christmas Eve USO show at Union 3 in Baghdad, Iraq. Marine Corps Gen. Joe Dunford, the chairman of the Joint Chiefs of Staff, brought the show to Iraq to thank service members for their efforts and sacrifices during the holidays. DoD photo by Jim Garamone
“They are keeping America safe,” he added. “It’s a way to tell them that their service is appreciated. The chairman and I really wanted to come spend Christmas with those who are really getting after the defense of our country -- that’s those who are serving in harm’s way.”
Dunford and Troxell both have been in the shoes of the service members they are visiting, missing numerous Christmases with their families doing the nation’s business. Dunford said he has missed four or five Christmases at home just since 2001.
Troxell recalled the first Christmas he missed when he was assigned to the 82nd Airborne Division at Fort Bragg, North Carolina. “I left the house on the morning of 19 December 1989 and told my wife I would see her at noon to take her shopping,” he said. “I didn’t show back up until Jan. 11. I got alerted, marshaled, deployed, and parachuted into Panama City. That was the first one of many Christmases missed.”
Posted by Paul Davis at 10:21 PM