Presenting The Real World Of Spy Tradecraft: The AFIO's Guide To The Study Of Intelligence 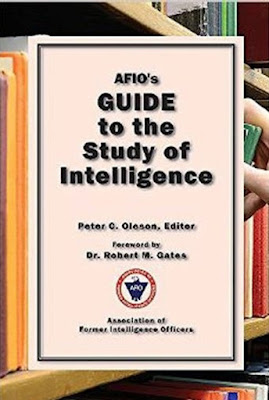 Veteran journalist and author Joseph C. Goulden offers a good review in the Washington Times of the AFIO's Guide to the Study of Intelligence.


Now, several score members of the Association of Former Intelligence Officers have teamed to produce an unclassified book that is the most thorough — and reliable — picture of the real world of intelligence that you are apt to find. Although the volume is aimed at students in the 276 colleges that offer courses in intelligence and national security, it is high on my should-read list for anyone interested in how the various components of the intelligence community actually function.
The book of 82 essays, edited by Peter C. Olson, who has 48 years of experience in the intelligence field, opens with more than 100 pages of history of intelligence over the years. Persons desiring to delve deeper will find a rich trove of electronic guides to unclassified sources, many of them from intelligence agencies. (Some of these agency home pages contain enough material for hours — yea, days — of reading.)
Thereafter, the book offers a detailed and highly readable tour of current intelligence, including the sophisticated satellite and listening station networks that keep a watchful eye on America’s adversaries. It goes beyond traditional agencies to focus on the roles that local law enforcement has in counterterrorism.
You can read the rest of the review via the below link:
http://www.washingtontimes.com/news/2016/dec/12/book-review-afios-guide-to-the-study-of-intelligen/
Note: My friend Joe Goulden began his otherwise fine review with a swipe at Ian Fleming, stating his James Bond thrillers were nonsense. As an Ian Fleming aficionado, I'd like to remind readers that Ian Fleming wrote his admittedly highly romanticized novels unabashedly for pleasure - his own as well as for his many readers. The books are fictional thrillers and they are meant to be entertaining and not a true presentation of how intelligence agencies operate.

And John le Carre, often presented as the anti-Fleming when it comes to realism, has stated repeatedly that his spy novels come much more from his imagination than from his five years as a British intelligence officer.

You can read two of my Crime Beat columns on Ian Fleming and James Bond via the below link:
http://www.pauldavisoncrime.com/2010/06/casino-royale-revisited-film-that.html

http://www.pauldavisoncrime.com/2013/11/my-crime-beat-column-happy-anniversary.html
Posted by Paul Davis at 2:37 AM