Hemingway As The Godfather Of Long-Form 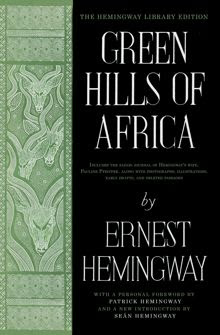 Richard Brody at the New Yorker offers a piece on Ernest Hemingway's Green Hills of Africa.


Hemingway’s 1935 book “Green Hills of Africa,” which has just been republished by Scribner in a new and augmented edition, is a work of nonfiction. It’s not his first; his encyclopedic account of the world of bullfighting, “Death in the Afternoon,” was published in 1932. But that book is about bullfighting overall, occasionally adorned with references to Hemingway’s own experience. It’s not a narrative; it’s a history and an analysis sprinkled with anecdotes. In “Green Hills of Africa,” by contrast, Hemingway states his ambitions clearly in a brief foreword:
Unlike many novels, none of the characters or incidents in this book is imaginary. . . . The writer has attempted to write an absolutely true book to see whether the shape of a country and the pattern of a month’s action can, if truly presented, compete with a work of the imagination.
You can read the rest of the piece via the below link:
http://www.newyorker.com/culture/cultural-comment/hemingway-as-the-godfather-of-long-form
Posted by Paul Davis at 3:51 AM